The following article appeared in The Source on September 23, 2015. 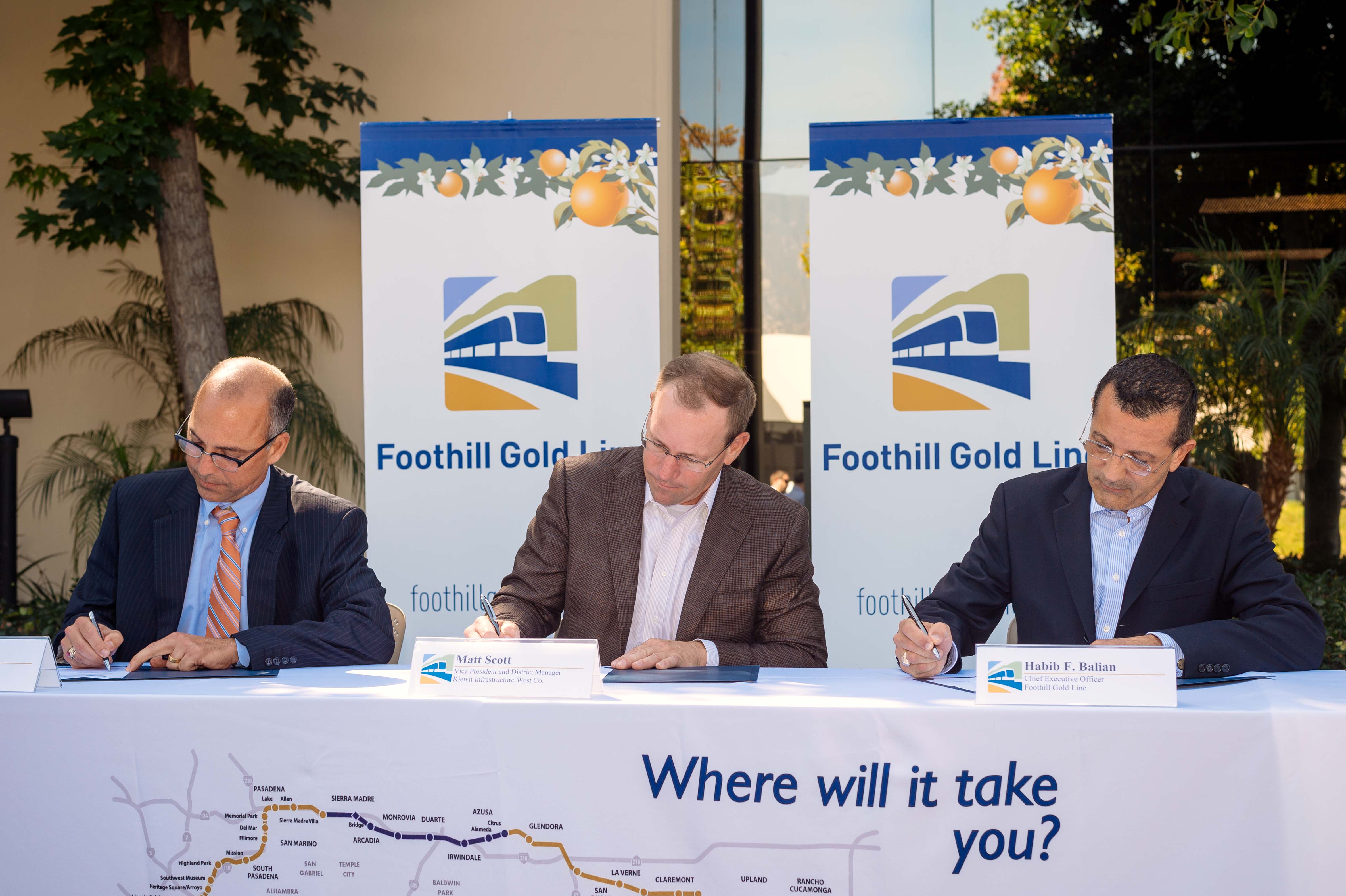 Officials with the Foothill Extension Construction Authority and the contractor sign the certificate of substantial completion on Wednesday morning in Monrovia. Photo: Steve Hymon/Metro.

A big congratulations to the Gold Line Foothill Extension Construction Authority, which today announced the substantial completion of construction of the 11.5-mile project that extends the Gold Line from eastern Pasadena to the Azusa/Glendora border. ‘Substantial completion’ means the project is ready for use with only a few small tasks — basically clean-up items — to be done.

The Construction Authority is the independent agency charged with building the project. With construction basically done, the Authority will begin the process of handing over the project to Metro. In turn, Metro can then begin pre-revenue service — i.e. further testing and employee training. We don’t have an opening date yet, but Metro has budgeted for the project to open in the first half of 2016.

The Foothill Extension follows a freight railroad right-of-way that has been in existence for many decades — and was once the route of the famed Santa Fe Super Chief that ran between Los Angeles and Chicago. There were three construction contracts that covered the project — one for the 210 bridge, one for the main track alignment and one for the parking structures. Work on the first of the structures, the 210 bridge, began in mid-2010.

Metro would like to thank and congratulate everyone at the Foothill Extension Construction Authority and the many workers with the three contractors on the project — Kiewit Parsons Joint Venture (which built the main alignment and rail yard), Skanska USA (which built the bridge over the 210) and Webcor Builders (which built the parking structures and enhancements). A special thanks goes out to the many construction workers who toiled during some brutally hot San Gabriel Valley weather the past few summers.

The news release from the Construction Authority is below:

Completion, the $1 Billion, Six-Station Light Rail Project is Completed On Time and On Budget

Monrovia, CA – The Foothill Gold Line Construction Authority (Construction Authority) announced substantial completion of the third and final design-build contract for the $1 billion Foothill Gold Line from Pasadena to Azusa during a press conference at their headquarters this morning. The alignment design-build contract was completed by Foothill Transit Constructors – a Kiewit-Parsons Joint Venture over the last four years, and included design and construction of all elements of the 11.5-mile light rail project with the exception of the Gold Line Bridge over the I-210 Freeway and five intermodal parking facilities (each completed on time and on budget under separate contracts). The $515 million alignment contract included design and construction of six new stations, the 24-acre Operations Campus, 28-miles of light rail track, four miles of relocated freight track, two dozen bridges, fourteen at grade street crossings, all power and systems elements, testing of the line, and much more.

“The Foothill Transit Constructors team did an outstanding job designing and constructing the light rail project,” stated Construction Authority CEO Habib F. Balian at the press conference. “It is unusual for a billion dollar public infrastructure project to come in on time and on budget, but they were partners with the Construction Authority from the start and I am pleased to say we ended as partners as well.”

With this final contract completed, the Foothill Gold Line from Pasadena to Azusa will now be turned over to Metro for pre-revenue service, a phase of training for operators, emergency responders and the community. Metro anticipates starting pre-revenue service in the coming days and passenger service in Spring 2016. An opening date has not yet been determined, but Metro has committed to announcing a start date within 30 days of turn-over.

“Reaching substantial completion is an important achievement for the entire team at the Construction Authority, Metro, and with our contractors and consultants,” added Balian. “We are proud to be the first light rail project funded by Measure R to have broken ground and to now be completed, and we look forward to handing the project over to Metro as they prepare to put the extension on-line in 2016.”

The Foothill Gold Line from Pasadena to Azusa broke ground in June 2010. Over the last five years of design and construction, the team logged more than 2.4 million work hours and completed with an excellent safety record. It was estimated by the Los Angeles Economic Development Corporation that nearly 7,000 jobs were created during the last five years on the project.

About the Foothill Gold Line – The Foothill Gold Line is a nearly $2 billion, 12-station extension of the Metro Gold Line light rail system, being overseen by the Foothill Gold Line Construction Authority, an independent transportation planning and construction agency created in 1998 by the California State Legislature. The project is planned in two segments – Pasadena to Azusa and Azusa to Montclair. The Pasadena to Azusa segment is fully funded by Los Angeles County’s Measure R. Metro anticipates starting passenger service in 2016; a date for service to begin will be announced soon by Metro.  Measure R is funding the majority of the cost associated with the advanced engineering and environmental work currently underway for the Azusa to Montclair segment, which will ready the project for a design-build procurement in 2017. The Construction Authority is currently seeking the $1 billion needed to construct the Azusa to Montclair segment.