This article originally appeared in the Pasadena Star News website on 4/13/2013.

Work will cause lane closures, disruptions for up to seven months 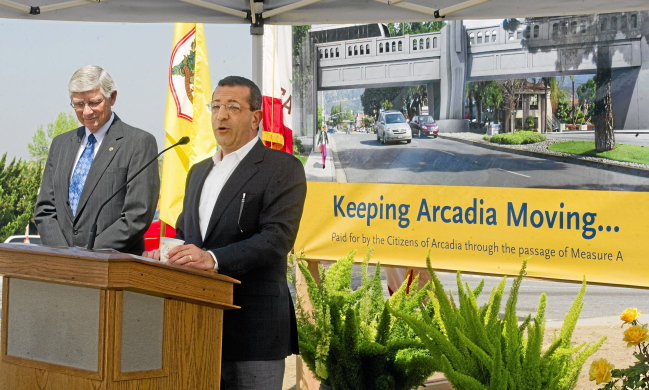 ARCADIA — City officials celebrated on Friday the groundbreaking of a nearly $12.5 million Gold Line bridge that will be built over Santa Anita Avenue south of Colorado Boulevard.

Starting on or near May 1, the new bridge’s construction, which will take seven months, will cause lane closures on Santa Anita Avenue, disruptions and detours, including not being able to enter In-N-Out Burger from Santa Anita Avenue for four months.

However, officials say the bridge – which is being paid for by a voter-approved bond measure and city transportation funds – will provide a safer and less disruptive alternative than an at-ground crossing that was originally slated there.

“I know it will involve several months of headaches, especially for the businesses but once the construction is complete, I think we’ll all look back and say, it was the right thing to do,” Councilman Gary Kovacic, who chaired the committee that promoted the passage of Measure A seven years ago, said Friday. “Santa Anita is one of the major north-south thoroughfares of the region. I just felt that having an at-grade crossing would not only cause traffic jams, but create traffic hazards as well. Anytime you have pedestrian, car and train traffic at the same grade, you create a risk.”

The Santa Anita Avenue bridge is among the more than 20 being built or modified to make way for the $735 million, 11.5-mile Foothill extension from Pasadena to Azusa. Since Santa Anita Avenue did not meet technical requirements for such a bridge, an $8 million bond issue was passed by voters in 2006 with the city using transportation funds to cover the balance, Mayor Bob Harbicht said. While the Metro Gold Line Foothill Extension Construction Authority is building the bridge, Arcadia is the only community along the 11.5-mile Pasadena to Azusa alignment that is paying for one at its own expense.

“Santa Anita is a very busy street,” Harbicht said. “At peak hours, there would be a closure every five minutes for a train to go by. We just felt we didn’t want to introduce this extra traffic congestion into our community.”

In-N-Out Burger customers will have to enter the drive-through from Colorado Boulevard rather than from Santa Anita Avenue, where cars usually queue up, for about four months.

Bagel shop owner Michael Goldstein has expressed concerns that customers might not know how to enter his business since his drive-through entrance will be blocked for four months but his northernmost entrance will be open. Buch said they’re “putting extra signs from the street so it’s very clear to people how to get to his business” and will monitor the situation.

Doug Tessitor, chairman of the Gold Line Construction Authority and a Glendora councilman, said Friday’s groundbreaking was “a giant step forward” for the project. Having Arcadia step up and provide funds for the bridge is also “huge,” he said.

“Arcadia just recognized this reality of the situation, stepped up and did what any good partner and citizen would do,” he said. “They accepted responsibility.”

Tessitor said funding is still needed for the planned light rail’s extension from Glendora to Montclair Transit Center, which he estimated at about $950 million.

The foothill extension from Pasadena to Azusa is slated for completion in 2015. For more information, go to foothillextension.org or call 626-324-7098.

Thank you to the residents and businesses that have been impacted by the closure for your patience and understanding.