The Construction Authority announced this week that the Foothill Extension light rail project from Pasadena to Azusa is now more than 50% complete. The project is on-budget and on-schedule to be completed and turned over to Metro in September 2015 for testing and pre-revenue service. Metro will decide when passenger service starts.

Tell us what you think about the Gold Line reaching 50% completion on our Facebook page: www.facebook.com/iwillride

Here’s a look at some interesting statistics and achievements since work began in 2010:

– More than 600,000 work hours have been expended – with zero hours lost due to injury
– 8 of the 14 at-grade street crossings have been completed
– 15 of the 24 bridge structures are completed, including the five-time award-winning $18.6 million Gold Line Bridge
– The 24-acre, $265 million Operations Campus is now 40% complete, and will be turned over to Metro in just over a year from now
– 70% of utility work along the 11.5-mile alignment is finished
– More than 50% of the Overhead Catenary System foundations have been put into place
– Freight track between San Gabriel Ave in Azusa and the Glendora city border has been fully realigned to its new position south of the future light rail tracks

Below are a few aerial and ground-level photos that were taken only days ago. More photos of the project’s progress at 50% can be found at our online gallery. 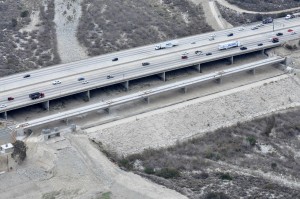 The 700-foot-long San Gabriel River Bridge is the longest of 24 bridges being built for the project. 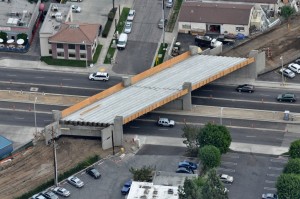 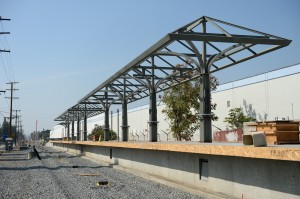 Duarte/City of Hope Station was the first to receive its' canopies. 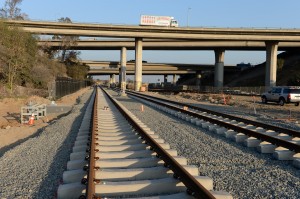 First light rail tracks are being installed, west of Irwindale. 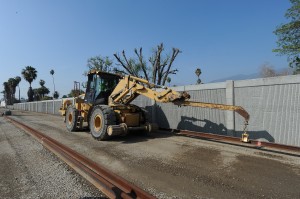 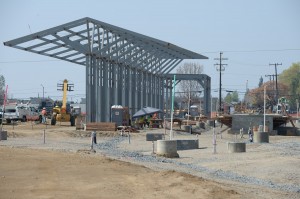 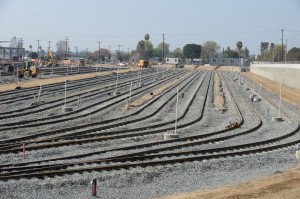 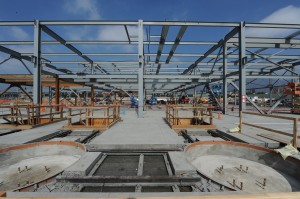 Pasted below is the press release announcement from the Construction Authority:

“We were the first Measure R rail project to break ground, and we have stayed on-schedule and on-budget since we began work in 2010,” commented Construction Authority CEO Habib F. Balian on the milestone. “We still have a significant way to go to substantial completion, but the progress already made provides the confidence that we will be able to meet our schedule and deliver this regionally significant project on time and on budget.”

All three design-build projects have been awarded for the project: (1) the $18.6 million Gold Line Bridge to Skanska USA; (2) the $486 million Pasadena to Azusa Alignment to Foothill Transit Constructors – a Kiewit-Parsons Joint Ventura (FTC); and (3) the $48.7 million Intermodal Parking and Enhancements to Webcor.  The Gold Line Bridge was completed on time and on budget in late 2012, and was recognized in 2013 with five prestigious industry awards for its design and construction.

The largest contract – the $486 million Pasadena to Azusa Alignment – is being designed and built by FTC, and is also on-schedule and on-budget. Since work began in early 2012, FTC has utilized nearly 500,000 work hours on the project and has now surpassed 50% completion. To date, eight at-grade street crossings, 15 bridge structures, 40% of the Operations Campus, and 70% of the utility work has been completed. The freight track between San Gabriel Ave in Azusa and the Glendora city border has been fully realigned to its new position south of the future light rail tracks, more than half of the Overhead Catenary System foundations have been put in place, and light rail track is starting to be installed. Importantly, of the nearly half million work hours completed, none have been lost due to injury.

“The excitement is building, as it becomes more and more apparent that the Gold Line will soon be arriving in these corridor cities,” added Balian. “As each bridge is completed, station canopy installed, or at-grade crossing re-opened following installation of rail improvements, our progress is evident to the community and to our city officials. We appreciate everyone’s patience and cooperation as we build this project.”

Just 18 months from now, the Alignment and Parking contracts will be completed. The Construction Authority anticipates having the Operations Campus ready for the Los Angeles County Metropolitan Transportation Authority (Metro) in March 2015, and the remainder of the project turned over to Metro in September 2015 for testing and pre-revenue service. Metro will decide when the project opens for passenger service.

Here is what the project’s corridor mayors are saying about the 50% project milestone:

“I am extremely impressed as I watch the Gold Line being built in Azusa. Crews are nearly complete with the enormous undertaking of moving miles of freight track into its new position; while also building or rebuilding nine rail bridges and completing new street crossings across the city. Work has recently begun on our two future stations, and soundwalls are now under construction along the length of the rail corridor. I am confident that the project is more than halfway complete in our city, and I applaud the Construction Authority and their contractor for a remarkably smooth job so far. Keep up the good work.”

“Monrovia residents are patiently accepting the challenges brought by construction, because we all eagerly anticipate the Gold Line arriving in our city. The excitement is certainly building, especially now that we see the Monrovia station and parking facility starting to take shape.  Our city continues to move forward on the plans for our Station Square development, including the largest public works project in our history that will be built up literally around the Monrovia Gold Line station.”

“Construction of the Gold Line has gone very well in Arcadia, since the project broke ground at Newcastle Park in June 2010. The Gold Line Bridge over the eastbound I-210 Freeway has won awards for its’ unique design and engineering, and the three other rail bridges in the city are also quite impressive. The Construction Authority and their contractor have done an excellent job making sure that the light rail project fits aesthetically into our city so well that I believe it is going to feel like the train never left Arcadia.”

“The 50% completion of the Gold Line to Duarte marks a triumphant shift in transit options for Duarte residents.  We look forward to 100% completion when we can ride the Gold Line into Pasadena and LA.  The canopy structures are already installed at our beautiful station, and light rail track is being laid just a few hundred feet to the east.  I look forward to celebrating the completion of the Duarte/City of Hope station just a few short months from now.”

“I have watched the Gold Line construction throughout the 11.5-mile corridor over the last year. The work is moving quickly and is already having an impact on the area. With so many workers coming in and out of Irwindale daily, I believe that reaching 50% helps them realize that help is truly on its way. Soon they will be able to utilize the new rail line to get to and from work, and allow our city to grow in new and more sustainable ways.”

About the Metro Gold Line Foothill Extension – The Foothill Extension is a nearly $2 billion, 24-mile extension of the Metro Gold Line light rail system, being overseen by the Metro Gold Line Foothill Extension Construction Authority, an independent transportation planning and construction agency. The project is planned in two segments – Pasadena to Azusa and Azusa to Montclair. The Pasadena to Azusa segment is fully funded by Los Angeles County’s Measure R and is on schedule to be completed in September 2015, when it will be turned over to Metro for testing and pre-revenue service. Measure R is funding the majority of the cost associated with the upcoming advanced conceptual engineering and environmental work for the Azusa to Montclair segment (San Bernardino County will fund their portion of the work). The Construction Authority issued a Request for Proposals for this work in January 2014, and anticipates awarding a contract for the 18-month design and environmental work in April. The Construction Authority continues to work with Metro to seek the nearly $1 billion needed to construct the Azusa to Montclair segment.