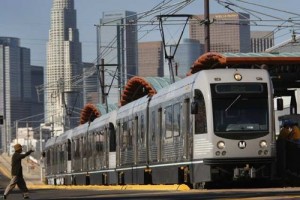 Photo: A passenger catches the Gold Line at Pico/Aliso station. Legislation has been introduced to allow it to extend into San Bernardino County. Credit: Allen J. Schaben / Los Angeles Times

The original article was posted on the Los Angeles Times Website on February 7, 2012.

A proposal to extend the Gold Line light-rail system from Azusa to Montclair in San Bernardino County faces a hiccup: the state law authorizing the project limited it to Los Angeles County.

So Assemblywoman Norma Torres (D-Pomona) introduced a bill this week to authorize the Gold Line extension to go beyond the county line at Claremont. The measure would also allow the Los Angeles County Metropolitan Transportation Authority to operate part of the Gold Line in San Bernardino County.

The Gold Line runs from East Los Angeles to Pasadena, while construction is underway on an extension to Azusa. Francisco Estrada, Torres’ chief of staff,  said AB 1600 is not meant as a slight to any city. “We are not bypassing Claremont, just extending the line from Claremont to Montclair,” he said.

Claremont Mayor Sam Pedroza said Tuesday that he supported the change in law and wants the Gold Line eventually to connect with Ontario International Airport. “The extension to Montclair gives the project a `foot in the door’ into San Bernardino County,” Pedroza said.

But at least one group is objecting to changing state law to expand the Gold Line outside of L.A. County. Sunyoung Yang of the Bus Riders Union said expanding light rail is expensive and comes after bus service cutbacks in Los Angeles County.

“We think it’s a horrible idea,” she said. “Building light rail around Montclair, where there is not a large concentration of people, we don’t think merits our light rail investment.”