This story appears in the 01/31/2012 edition of the Pasadena Star-News. Original online article available here. 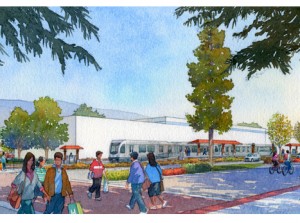 The city of Duarte was selected as a recipient of a $400,000 METRO grant for planning and development around the future Gold Line Station. This is a rendering of what the station could look like. (Courtesy Photo)

DUARTE – The city was selected to receive a $400,000 grant to plan for a mix of development near the future Gold Line station, officials said Monday.The L.A. County Metropolitan Transportation Authority (Metro) grant will provide the city seed money to pave the way for a “vibrant and mixed-use transit village” around the Gold Line station, which will be on Duarte Road west of Highland Avenue.

The site slated for development, which includes up to 19 acres generally at the northwest corner of Duarte and Highland, would likely offer residential units, offices, research and development, some retail and possibly a hotel, officials said.

“This is really good news, especially when there are few and dwindling dollars out there,” City Manager Darrell George said of the transit-oriented development planning grant. “It’s a little ray of positive light in these difficult times with the dissolution of redevelopment (agencies).”

The grant will allow the city to accelerate plans to develop an Environmental Impact Report and a specific plan needed to allow future transit-oriented development at the site, which is currently zoned for manufacturing. It will also be used to conduct critical community outreach, officials said.

“This is one of those once-in-a-lifetime projects,” George said. “It really establishes another center of activity in a small community like ours.”

The grant also provides an incentive to developers, who would usually pay for such documents to be completed as a condition of approval, said senior planner Jason Golding.

City officials view the City of Hope National Medical Center, the city’s largest employer located south of the project area, as “their main significant partner” to whatever development takes form there. Officials have been working with the medical center on their interest in the development of the property for potential hospital and office-related uses.

“Their campus is ever-expanding also; we’ll certainly include them in meetings and conversations,” George said.

As part of the grant application, the city has committed to providing a $50,000 cash match that will be targeted for public outreach and economic or marketing studies. The city has also agreed to provide $25,000 worth of staff time, Golding said.

Mayor John Fasana said that any future transit-oriented development should be sensitive to both the market and the interests of the City of Hope, which employs about 3,500 people. There is a market interest and a demand for research and development facilities, lunch counters as well as housing ranging from affordable to higher end, Fasana said.

“I think the grant helps us develop a great plan that will be attractive to the investment community,” Fasana said, noting that the grant will allow for input that will inform the process.

Councilwoman Margaret Finlay said the city is thrilled to get a Gold Line station on the Pasadena to Azusa extension, which is expected to open in 2015.

Not only will it make Duarte more attractive with quick access to the L.A. metro area, but she believes it should also also raise property values.

The city was also notified last year that it will receive a Metro grant in 2016 of about $533,500 to make pedestrian-area improvements along Duarte Road from Buena Vista to the future Gold Line station.

Those improvements include sidewalks, street lighting, street trees and pedestrian amenities. The city will match about $357,000 of that grant with staff time and other transportation funds, Golding said.