﻿The following article was published on the Engineering News Record Magazine website. 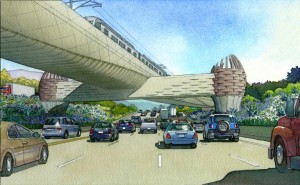 By Greg Aragon in Los Angeles

Traditional art and modern-day seismic technology will join in an iconic structure to be built as part of the first phase of the $735-million, 11.5-mile Metro Gold Line Foothill Extension in Los Angeles County. Last month, the Foothill Extension Construction Authority unveiled the winning design for an $18.6-million bridge over the 210 freeway in Arcadia that will also sport “smart column” seismic-assessment wiring.

Dubbed the “Gateway to the San Gabriel Valley,” the 584-ft-long bridge is scheduled to be completed next summer. It is the first phase of the overall Gold Line’s Pasadena-to-Azusa light-rail extension, which broke ground in August 2010 and is scheduled to finish in 2015.

“We started the design process with an artist’s concept paying homage to the region’s historic Native American basket-weaving tradition,” says Habib F. Balian, CEO of the Foothill Extension Construction Authority, the entity in charge of building the line from downtown Los Angeles to the eastern county line, along the foothills of the San Gabriel Valley.

The unique design was created by award-winning public artist Andrew Leicester, who was selected through an international competition seeking a signature bridge facade that would best embody the San Gabriel Valley. His winning idea features two prominent “basket” columns as well as the superstructure’s serpentine-like underbelly.

Leicester says he researched the area and discovered an ancient trade route used by Native Americans that paralleled the 210 Freeway.

“The Tongva [tribe] were the earliest dwellers in this area, and they are famous to this day for their skill in basket making,” says Leicester, who was born in England and has created public art projects throughout the U.S., U.K. and Australia. “I thought this was a good opportunity to wrap the columns in an ornamental sheathing and basket textile patterns as an attractive way to disguise the columns.”

Leicester compared the structure of a basket to the construction method of concrete and says he works very closely with AECOM, the main design subcontractor for the design-build team led by Skanska USA. “Metal rebar is the skeleton, and it is clad with skin of concrete. With a basket, you have structural members inside the basket that give it its silhouette and it has a decorative skin woven around the members.”

The pre-cast “basket” columns, measuring 25 ft tall and 17 ft in dia, will be assembled in segments off-site and trucked in next August. Skanska has yet to find a subcontractor to build the pieces.

Another architectural nod to the region will be the curving underbelly of the superstructure, which Leicester says represents the California king snake.

In addition to the unique design features, AECOM is integrating time domain reflectometry (TDR) technology, which the authority claims has never before been used on bridge foundations.

The technology can help assess any damage following an earthquake. The reinforcing steel cages that strengthen the bridge’s 110-ft-deep, 11-ft-dia major foundations include, to identify any damage, wiring placed into the structures to provide electrical feedback when signals are transmitted down the columns.

“When engineers design bridges, they can predict approximately where damage may occur during a seismic event,” says Gary Baker, director of construction for the construction authority. He says the “smart column” technology will allow engineers to make an initial assessment regarding the integrity of the columns’ structures electronically, rather than relying on the traditional method of digging trenches adjacent to areas where engineers suspect damage might be found.

Because this is the first of three contracts on the Gold Line extension project, Skanska must finish the bridge before a joint venture of Kiewit Corp. and Parsons Corp. can begin its $486-million, Pasadena-to-Azusa second-phase contract, according to Baker.

If late, Skanska faces $6,000 per day in penalties. However, says Baker, the bridge project is currently on track to finish next December—four months early.