The following story appeared today on the front page of the San Gabriel Valley Tribune. 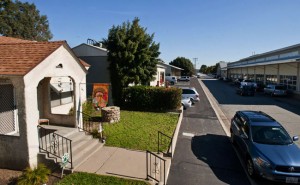 A home on the 2200 block of 1st Street between E Street and White Avenue is seen surrounded by industrial buildings in La Verne on Tuesday, Nov. 22, 2011. (Watchara Phomicinda/Staff Photographer)

Moving to protect revitalization plans for neighborhoods around a proposed Gold Line station, the La Verne City Council on Monday put in place a ban on new industrial developments in the area.

City officials envision a mixture of shops, restaurants and medium-density housing, such as lofts or rowhouses, surrounding the Gold Line station, which would serve both La Verne and the nearby Fairplex.

And though the station is still at least five years away from opening just east of E street on the existing railroad tracks, officials are already getting ready.

The unanimously approved moratorium applies to properties along First Street and Arrow Highway between E Street and White Avenue. Initially made for 45 days, the moratorium can be extended for up to two years.

The moratorium area is currently zoned for industrial and institutional use.

It is designed to prevent new businesses that would not fit in with the Gold Line plan from moving into the area before plans are finalized, Fredericksen said.

“That new industrial use that might come in would be very incompatible with the vision,” he said.

The moratorium will not affect businesses already in the area, as long as they don’t try to expand operations. But the long-term goal is the relocation of those businesses, according to the Specific Plan.

Mike Mata, owner of Performance Printing on First Street and a La Verne resident, has mixed feelings on the plans.

“I’d hate to move my business. I just moved into this location a year and a half ago,” he said.

Mata, who lives within walking distance of his business, conceded that the area would benefit from new development, but he still has worries.

“I like the idea of a cleaner spot,” Mata said. “As a homeowner, I love it. As a business owner, I’m concerned about my business.”

Fredericksen said city officials hope to have some of the developments ready by the time the Gold Line arrives several years from now.

“We are told that the shortest period of time would be approximately five years, but a realistic estimate is seven,” Fredericksen said of when the Gold Line will arrive.

Officials hope to implement the Old Town Specific Plan sometime in the spring. The plan, which also applies to properties closer to the center of town, would supercede the moratorium.

Next Stop… Arcadia
Construction Update and Picture of the Week