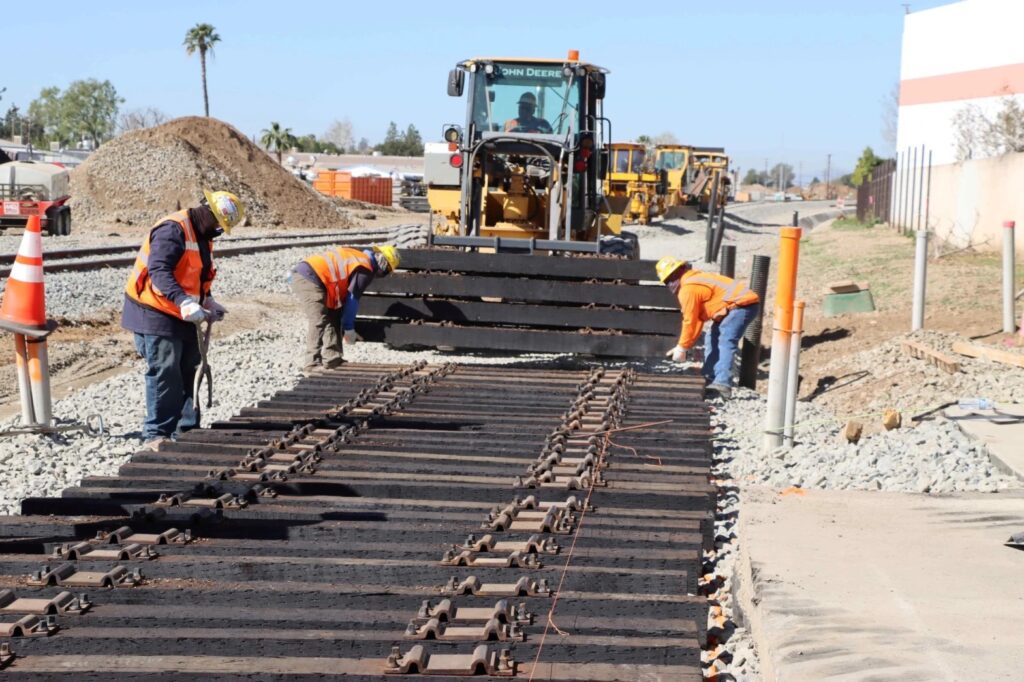 Crews install relocated freight track at Fulton Road grade crossing in Pomona for the Gold Line (now L Line) extension from Glendora to Pomona on Feb. 10, 2022. The extension of the LA Metro light rail line is funded to Pomona. But not to Claremont and Montclair, as planned. :A Metro on Thursday, Dec. 1, applied to the state for $798 million to complete the line. It was one of three rail projects in an application being sent to Sacramento for funding out of a state budget surplus. (image courtesy of the Metro Gold Line Foothill Extension Construction Authority)

After a contentious debate, LA Metro Board voted on Thursday, Dec. 1 to prioritize requests for nearly $2 billion in state funds for three rail projects that would greatly impact the San Fernando Valley, San Gabriel Valley and southeast Los Angeles County.

The board will submit its application next week to the California State Transportation Agency with high expectations the state agency will deliver significant money to help build two new rail projects and extend another, aiming to reduce freeway traffic and air pollution by converting drivers into rail passengers.

• Metro L (Gold) Line Foothill Extension Light Rail Transit Project ($798 million), is ranked as No. 2 priority. This would fully fund a 3.2-mile extension from Pomona to Claremont, and to the most eastern terminus of the line in Montclair, just over the Los Angeles County border in San Bernardino County. It would be the first Metro rail project to cross into another county, with the goal of easing gridlock from Inland Empire commuters who travel the 10, 210 and 60 freeways in and out of L.A. County. The Claremont-to-Montclair portion is scheduled to be paid for by the San Bernardino County Transportation Authority.

Tim Sandoval, Pomona mayor and board member for the San Gabriel Valley cities, said he supported all three projects. He said the Gold (L Line) extension project has been in the works since 2009 and should be funded because it has been environmentally approved and is ready to go. It is unique because it would allow Inland Empire commuters to ride a light-rail line to Pasadena and Los Angeles.

“We believe that the Foothill Gold Line is in an excellent position to compete well against other projects in Southern California,” said Habib Balian, CEO of the Foothill Gold Line Construction Authority, in a prepared statement. “The project is construction-ready and can be completed within the necessary timeframe, and therefore can start creating jobs and economic benefits for our region and the state.”