The following article appeared on Streetsblog LA on June 3, 2016.

However, between the Santa Monica and San Gabriel mountain ranges, Los Angeles has plenty of rich outdoor hiking to offer newcomers and native Angelenos alike. Unfortunately many of these mountain trailheads are nestled within wilderness roads and nearly inaccessible to those without a car. The looming mountain ranges that characterize Los Angeles and provide water resources to the region are often unfamiliar to many long-time residents.

Fortunately, one San Gabriel Mountains trailhead is finally accessible to car-less Angelenos eager to explore the region’s mountains. Since April, running through the end of June, a free city of Duarte shuttle takes riders from the Duarte/City of Hope Gold Line station parking lot to the historic Fish Canyon trailhead every Saturday between 7 a.m. and 6 p.m. The Fish Canyon trail, a 4.8-mile round trip hike through a San Gabriel canyon, traverses a lush landscape and ends at the triple-tiered Fish Canyon falls. The shuttle runs every thirty minutes and takes around fifteen minutes one way. Shuttles depart from Duarte on the hour and half-hour, and from the trailhead on the 15- and 45-minute marks.

The Fish Canyon Falls shuttle was implemented by the City of Duarte, and has been promoted by the San Gabriel Mountains Forever coalition. 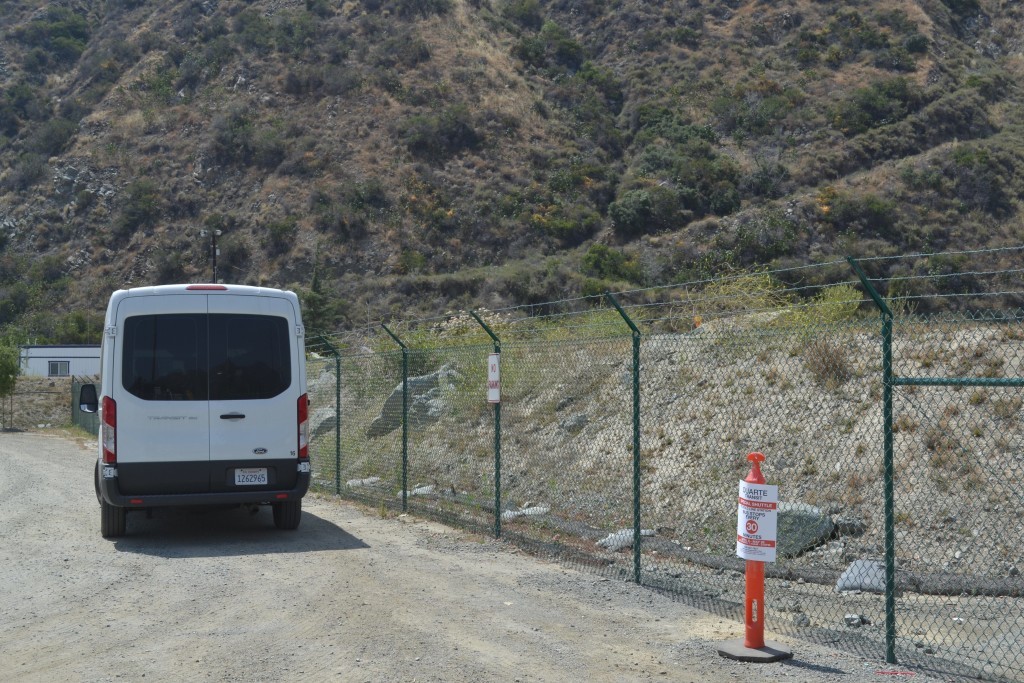 The Fish Canyon shuttle van waiting for passengers at the trailhead stop.

After speaking to thousands of Angelenos, we found the number one reason people don’t visit the outdoor trailheads is the lack of accessible transportation. A lot of families in low-income urban areas have disproportionate rates of diabetes and asthma; [public transit] provides them the opportunity to access otherwise unreachable locations and connect families to healthy outdoor activity.

Fasana mentioned the future potential outdoor transit opportunities available through the upcoming ballot measure R2, which would allow the use of flexible operational and local return funds to connect public transit to green spaces and open the San Gabriels for more Angelenos. 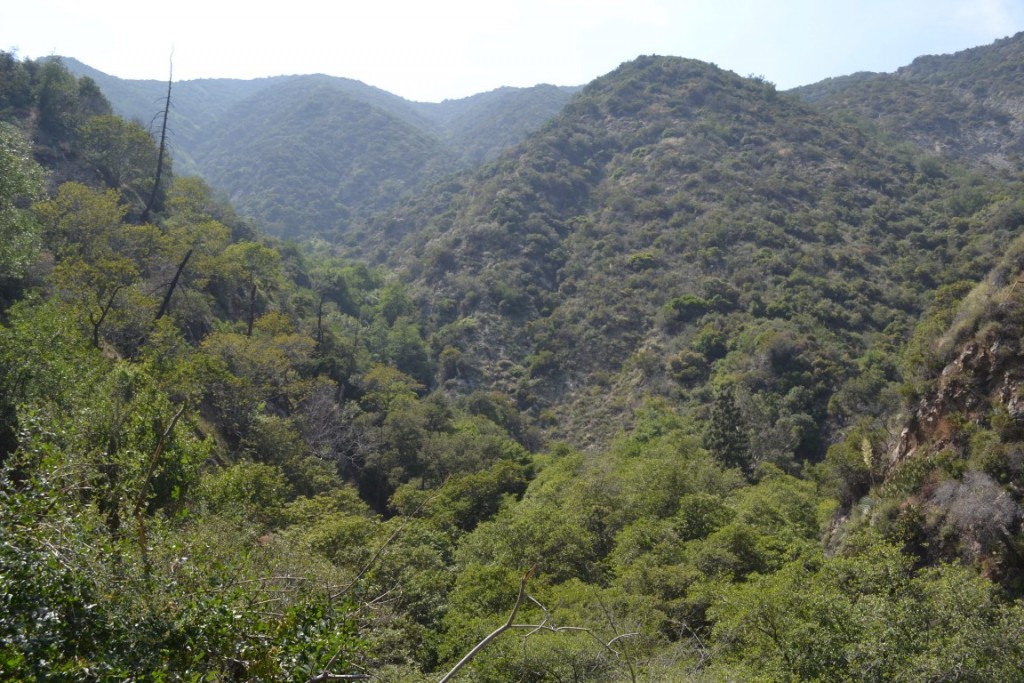 Fortunately, the Duarte Fish Canyon shuttle could be just the first of many transit connections to Los Angeles’s wealth of mountain ranges. With potential future funding, Los Angeles’s public transit, often mistakenly framed as a service for commuters to alleviate congestion, can provide access to affordable and environmentally friendly outdoor recreation to help create equitable, healthy communities. To car-less Angelenos, the mountains may seem a bit closer and more familiar.

You can find details about the hike here and the shuttle here. See more photos of the shuttle stop and hike below. 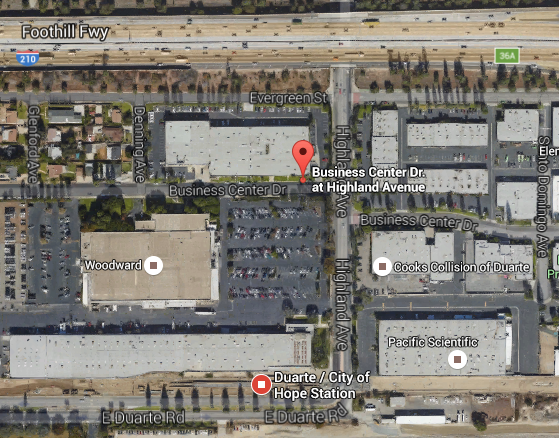 The Fish Canyon shuttle stop is located on Business Center Drive just west of Highland Avenue, a one block walk from the Metro Gold Line Duarte/City of Hope Station. Image via Google Maps. 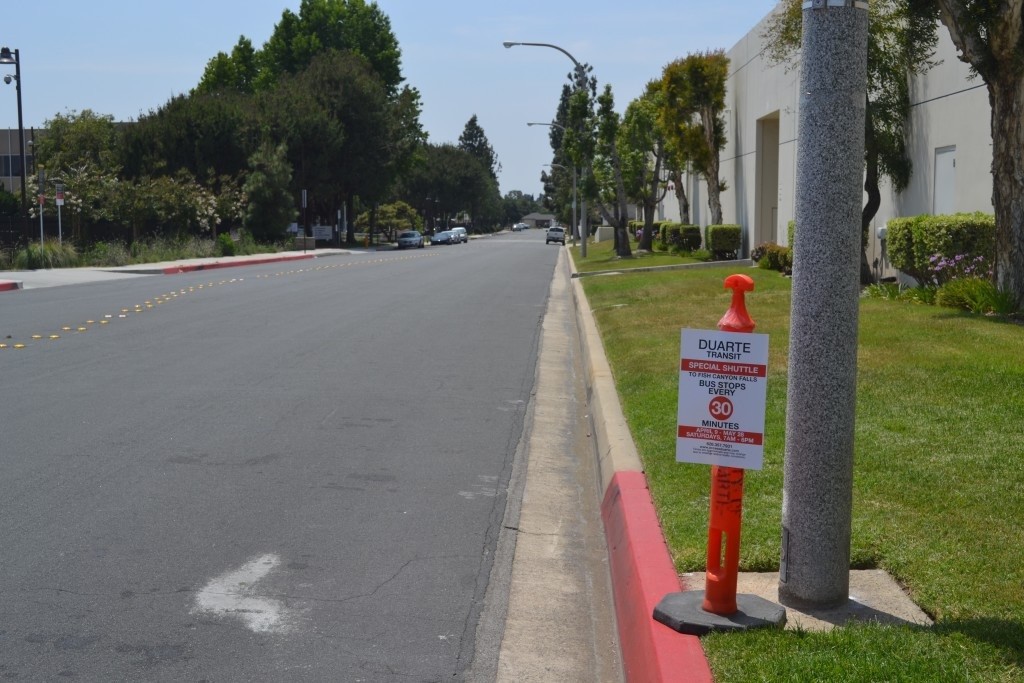 The Fish Canyon shuttle stop at the Gold Line end. The shuttle pulls up to the curb every thirty minutes on Saturdays, from 7 a.m. to 6 p.m. The ride from the Gold Line parking lot to the trailhead takes around ten to fifteen minutes. 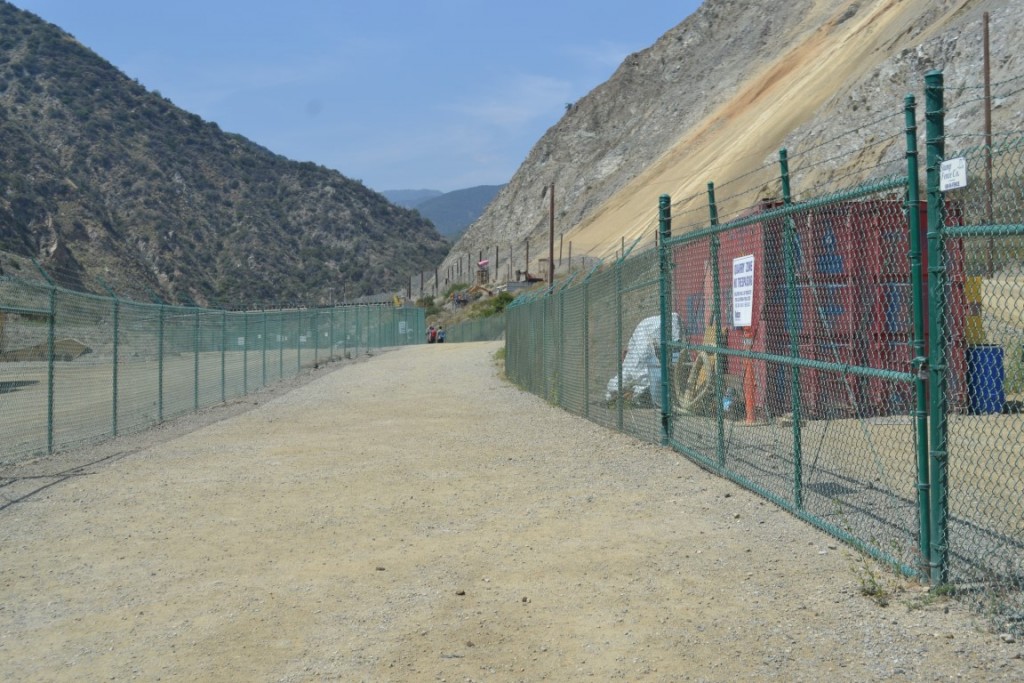 Don’t be misled by the start of the Fish Canyon hike, which wends through mining infrastructure and facilities. Lush green landscape and water are reached after about a half-mile walk. 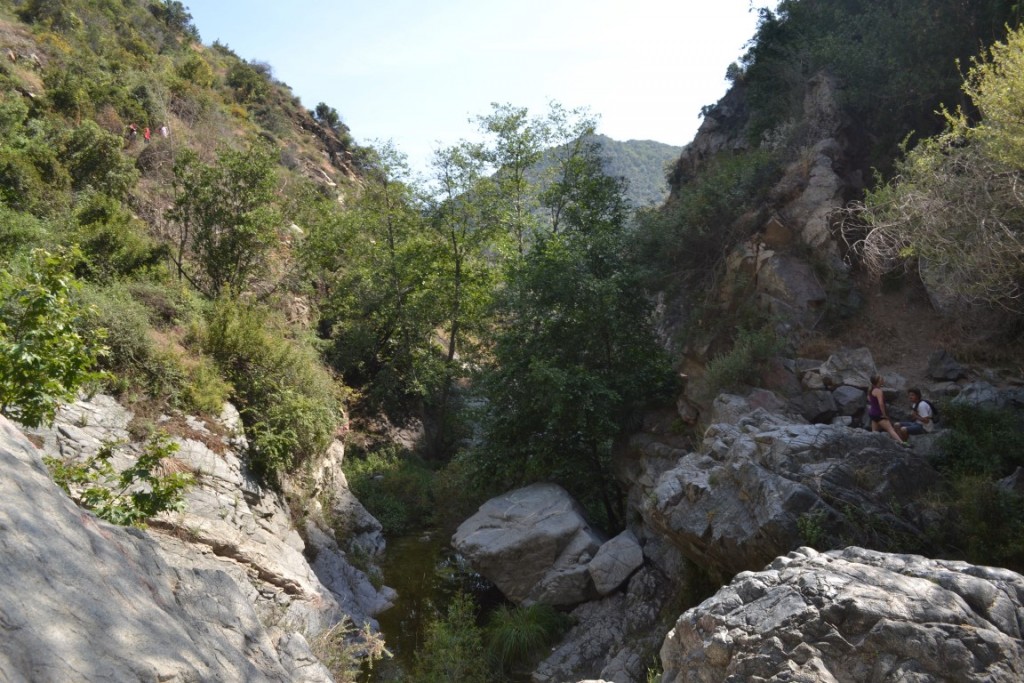 A couple of hikers enjoy the shade provided by the landscape. Also pictured is the run-off stream originating from the falls.

SBLA coverage of San Gabriel Valley livability is supported by Foothill Transit. Foothill Transit has been a leader in sustainable transportation for years. And now they’re committed to having a 100% electric bus fleet by 2030. To celebrate, Foothill Transit is giving away prizes and sharing facts about how their electric buses help clear the air. Visit Foothill Transit’s e-bus sweepstakes webpage to see how you can join in the eco-friendly fun!