This story appears in the May 20, 2012 online editions of the the Pasadena Star News. 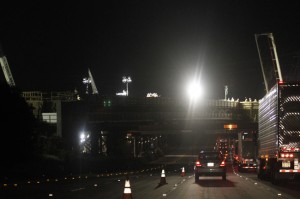 The three left lanes are closed on the eastbound 210 freeway, at Santa Anita, Monday night due to construction on the I-210 Gold Line Bridge, in Arcadia, Monday, June 18, 2012. Up to three lanes will close between Rosemead Blvd. and Santa Anita Ave. starting at 10p.m., with full closure beginning at 11:00p.m. Up to four lanes will re-open at 5a.m. and all lanes will re-open by 1p.m Tuesday. (Correspondent Photo by James Carbone)

ARCADIA – With Tuesday’s 16-hour “big pour” of 2,100 cubic yards of concrete, the 584-foot Gold Line Bridge is taking shape inside the wood forms above the eastbound lanes of the 210 freeway.

“It was a significant milestone for the completion of the iconic freeway bridge,” said Lawrence Damore, project executive with Skanska USA, which was awarded the design/build contract in June, 2010. “But you won’t see anything really different until we start removing the forms…although there will be a lot of work going on behind the scenes.”

The wood forms will stay in place while the concrete “cures” and hardens, and the rail-deck portion of the $18.6-million bridge will be poured overnight in July, Damore said Tuesday.

“That will be much smaller, with about a quarter of the concrete,” he said. And it’s unlikely that the deck pour will involve the same extended overnight closure that shut down the eastbound 210 from about 11p.m. Monday through 5:30a.m. Tuesday, Damore said.

“Last night Caltrans did allow us to close down a little earlier than usual so we could complete (the pour) on time” for the early morning reopening Tuesday, Damore said. “(Traffic) back-up was a little heavier than usual the first hour, but it cleared.”

Technically, Damore said, the concrete pour was difficult because of the freeway location, and more pumps were brought in to speed the process.

“Certainly any time (construction) involves shutting down a major freeway, in a sense it’s a bigger event than a normal bridge would be,” he said.

When the concrete structure – which includes about 1,000 tons of steel reinforcements – is complete and the bridge is self-supporting, the finishing touches will be installed, said Habib Balian, CEO of the Gold Line Construction Authority.

“The next stage is installation of the `baskets’ in September,” Balian said, referring to the two sculptural columns that echo the weaving traditions of local Native Americans.

“Then there will be after-construction cleanup, then (building of) the abutments and then we’ll begin landscaping and lighting,” Balian said.

The project’s overall design was envisioned by artist and “concept advisor” Andrew Leicester, and Balian said the final effect will be spectacular.

In contrast to the “typical gray-tinted concrete” on the bridge, the giant baskets will be an aggregate of different colored materials, Balian said. “It’s unique, nothing like it’s been done before.”

Residents of Arcadia, Duarte and Azusa, three cities on the $735-million, 11.5-mile Gold Line eastward expansion, will have a chance to meet Leicester and get updates from Gold Line Construction Authority officials and staffers of the main contractor at three open houses this month. All the events are from 5:30 to 7:30 p.m.

Construction Update and Picture of the Week
We hope to see you at an upcoming community open house – the first one is Tonight!