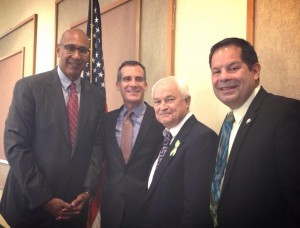 Photo of Construction Authority Vice Chairman and Claremont City Councilman Sam Pedroza, with State Assemblyman Chris Holden, Los Angeles Mayor Eric Garcetti and Claremont Mayor Joe Lyons at a Transportation Roundtable held earlier this week in the City of Claremont. As reported by the San Gabriel Valley Tribune this morning, “Garcetti also said he would favor adding the Gold Line Foothill Extension from Azusa to Montclair to the Short Range Transportation Plan, something Gold Line proponents and foothill cities have been demanding. But even if it wasn’t added by the Metro Planning and Programming Committee on Wednesday, he said he would work to find funding for the project.”