The following editorial appeared in the Los Angeles Times on September 29, 2016. 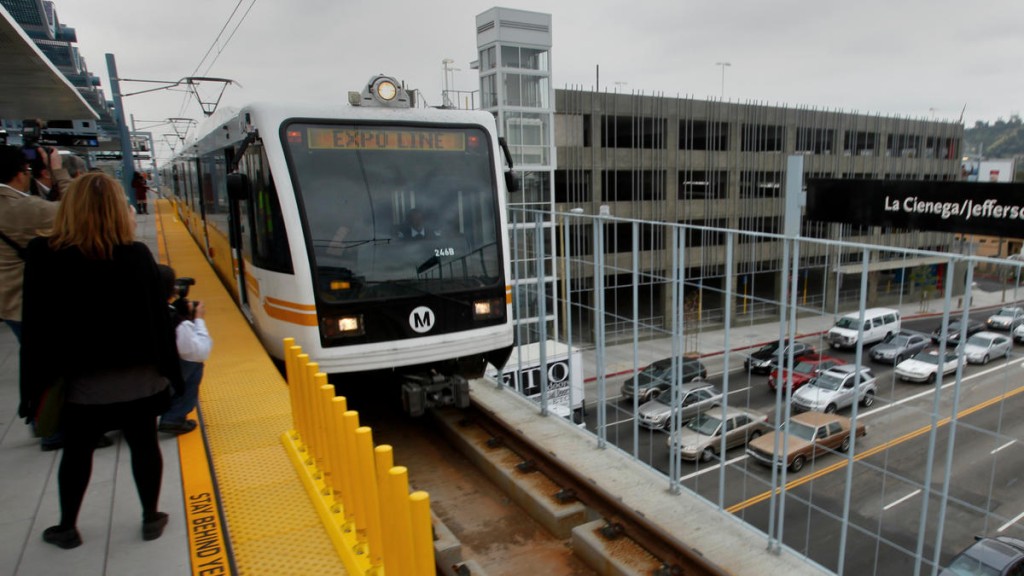 Los Angeles County residents crave fast, convenient and affordable transportation options. Just look at what happened when the new Expo Line extension to Santa Monica opened in May. It was crowded from the get-go, and ridership on the line since then has climbed 42% on weekdays and 90% on Sundays.

That experience has been repeated again and again as the Los Angeles County Metropolitan Transportation Authority has opened new rapid transit lines. More than 70% of the riders surveyed on the Gold Line after the extension to Azusa was opened in March said they were new to the train, and two-thirds of those said that they used to drive prior to taking the light rail. The Orange Line busway in the San Fernando Valley has far exceeded ridership projections.

There’s pent-up demand for alternatives to sitting in soul-crushing, air-polluting traffic. Los Angeles grew into a metropolis by relying on cars and freeways, but the region cannot continue to prosper without investing in a modern, efficient transportation system. Congestion makes it harder to conduct business and move goods — a problem in a region with the nation’s largest port complex. With a half-built transit system, people are left to drive long distances or rely on multiple buses and trains to reach work or school. Or worse, it means they don’t consider certain jobs or opportunities because of the commute.

To have a thriving economy, promote upward mobility and maintain the region’s quality of life, Los Angeles County has to do a much better job moving people. Voters understood that in 2008, when they passed Measure R, a 30-year, half-cent sales tax increase that kickstarted a public transit construction boom. But the need is great, and the job is not yet done. Measure M — a proposed sales tax increase on the November ballot to raise money for Metro — would finish the projects started by Measure R and, over the next 40 years, double the size of the region’s mass transit system, as well as fix highway bottlenecks, build bike paths and fill potholes. This is critical work, and voters should say yes.

If passed by 66% of the voters, Measure M would be perhaps the most ambitious local investment in transportation in the nation. The measure would permanently extend Measure R and add another permanent half-cent tax increase. Those would be on top of two other permanent sales tax increases for transportation that were passed in 1980 and 1990, raising the total tax for Metro to 2 cents per dollar spent. That would bring in about $3.4 billion a year. (If M passes, the sales tax rate in the county will range from 9.25 cents to 10.25 cents, depending on the city.)

Much of the money — 35% of the new revenue — would be used to build more than a dozen major transit projects, including new rail lines through the middle of the San Fernando Valley, between Artesia and downtown L.A. and over the Sepulveda Pass. The measure sets aside 20% of the money for the bus system, which still serves the majority of Metro’s riders, and is an essential but often undervalued part of the transportation matrix. And 2% of the funds would pay for bike paths, sidewalks, crosswalks and other “active transportation projects.” Taken together, this would be a huge, transformative investment in making it easier, safer and more convenient to travel around Los Angeles without a car.

Of course, the measure also includes money to aid those who drive cars and trucks. Metro would set aside 17% of the new revenue for a dozen highway projects and 17% for cities to spend on local transportation needs, such as pothole repairs and sidewalk improvements.

There are two primary arguments against Measure M. The most compelling is that the tax would last forever. It would not expire in 30 years, like Measure R was originally intended to do. Instead, its levies would continue in perpetuity unless someone collects the signatures to put a revocation measure on the ballot and a majority of voters approve it.

With an unending stream of money and no termination date, there is less incentive for Metro and its political leaders to be especially careful with the public’s money. That’s a legitimate concern, given the agency’s history of money management problems. Measure M includes an expanded Independent Taxpayer Oversight Committee, but Metro’s leadership and board must ensure that the committee is comprised of watchdogs, not rubber-stamping appointees.

Although we share the concerns about a forever tax, there is an important benefit of making M permanent: Metro would have a guaranteed stream of money to operate and maintain the expanded system, which is essential to protect future riders from getting stuck with failing equipment and shoddy service — problems that have plagued users of the Bay Area’s BART and Washington, D.C.’s Metro.

The other argument against Measure M is a parochial one. South Bay and Southeast Los Angeles County cities complain that their regions wouldn’t get transportation improvements soon enough, and they want voters to reject the sales tax increase this year with the hope of forcing Metro to draft another measure that prioritizes their projects. Good luck with that. Metro spent two years working with cities to develop a list of projects that could deliver the greatest value, while also ensuring that every corner of L.A. County would get a priority project built.

Besides, residents in communities that have to wait longer for projects probably still have to crisscross the county for work, school, family, friends and entertainment. They — and the region as a whole —  would benefit from a massive, unprecedented investment in transportation infrastructure. Vote yes on Measure M.