The following Editorial appeared in the Los Angeles Times on November 6, 2014.

Editorial: Will L.A.’s ‘subway to the sea’ finally get there? – Los Angeles Times 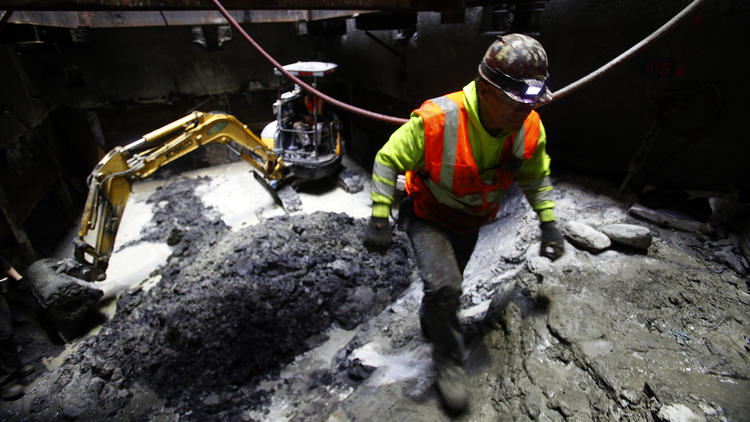 When then-Mayor Antonio Villaraigosa promised 10 years ago to build the long-stalled “subway to the sea,” many Angelenos probably rolled their eyes and thought, “Yeah, right. We can’t even get a train all the way to the airport.” But on Friday, Metro will officially break ground on the first phase of the Purple Line extension, a four-mile segment from the existing Wilshire/Western station to Wilshire and La Cienega boulevards in Beverly Hills that should be completed by 2023. The subway will travel under one of L.A.’s most densely populated and highly trafficked corridors. When it reaches Westwood and the Veterans Administration Hospital in 2035, the line will be the backbone of the region’s rapidly expanding public transit system.

Los Angeles County now has five rail lines under construction, including one that will connect to LAX by 2022, and two — the Expo Line to Santa Monica and the Gold Line to Azusa — slated to open in 2016. It’s easy to forget that when Villaraigosa pitched the subway to the sea while campaigning for mayor, major transit projects were moving at a snail’s pace, if at all.

To resuscitate the Westside extension proposal, Villaraigosa and the Metropolitan Transportation Authority had to persuade Rep. Henry A. Waxman to change the law barring use of federal funds to tunnel under Wilshire, a measure Waxman had pushed through after a 1985 methane explosion in the Fairfax area. They also had to find a way around a 1998 county ballot initiative by Supervisor Zev Yaroslavsky that prohibited the use of existing sales tax revenue to fund new subways. They did — L.A. County voters passed the Measure R half-cent sales tax in 2008, which dedicated about $4 billion for the Purple Line extension.

The full subway line is expected to cost $6.3 billion. A federal grant and low-interest loan will cover $2.1 billion of the $2.8-billion price tag for the first phase. Metro has asked the Obama administration to set aside an additional $1.4 billion for the second phase, from Beverly Hills to Century City, which is scheduled to be completed in 2025.

Looking ahead, L.A. leaders should continue to push for funding for the Purple Line, and should be willing to defend the project against lawsuits that may pop up along the way. And they should press for other transformational projects — a transit line over the Sepulveda Pass, connecting the San Fernando Valley with the Westside, and extending the Gold Line deeper into the San Gabriel Valley. Within the next 10 years, the transportation landscape in Los Angeles will look dramatically different, with lines crossing the region from Chatsworth to Long Beach and from Azusa to Santa Monica. This is what can happen when politicians actually deliver on their boldest promises.