Learn more about the life and nationally-recognized artwork of Eugene Daub in this Easy Reader profile (excerpt below). Eugene and his wife, Anne Olsen Daub, are the station artist team for the future San Dimas Gold Line station. To learn more about Eugene and Anne’s artwork for the San Dimas station, click here for the latest station fact sheet. 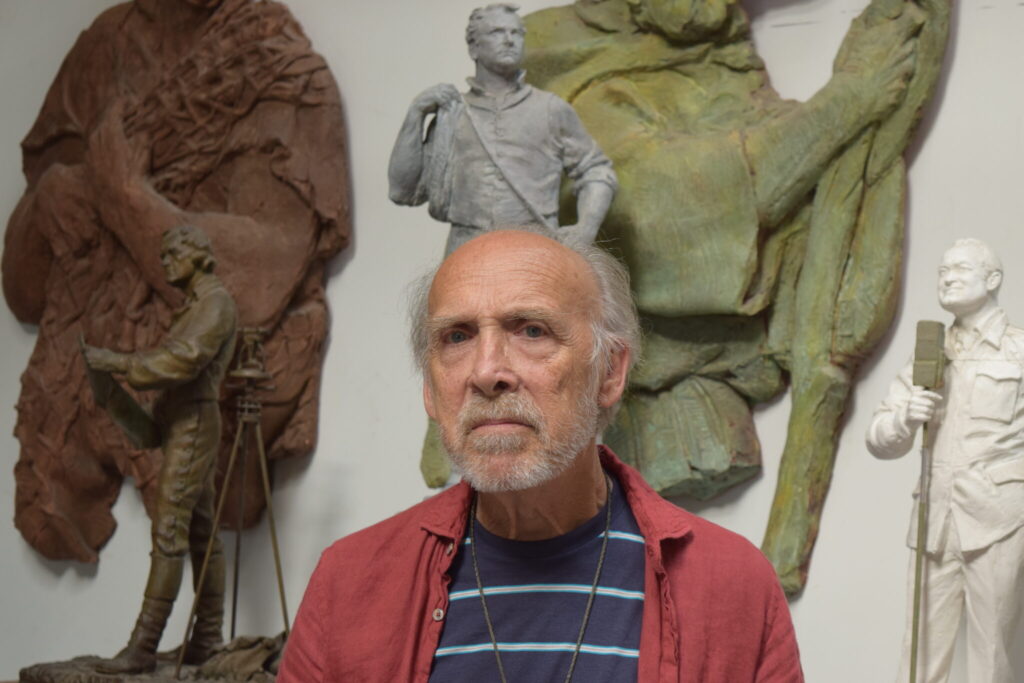 Daub, over the course of more than 40 years, has created in excess of 30 major projects, so there are “mementos” in nearly every corner of his vast studio. Presumably, Phinney and Sheppard had the same reaction: This would make a great show; and I think what interested them also was the educational aspect, that sort of peek behind the curtain to see the actual process that leads from the drawing board to the public monument—and I’ll just add that Daub not only has work in three state capitals but his statue of Rosa Parks is in the U.S. Capitol’s National Statuary Hall.

“Things started to happen for me,” Daub says, “and I started to get more and more commissions once I moved to California. And they weren’t from California, either, that was the funny thing; they were from different places.”

As noted above, and we’re not counting the hundreds of medallions or the works in ceramic clay that he does for himself, Daub has created in excess of 40 major pieces over three decades. That’s a lot of chiseling—not to mention planning and designing. So how long does each sculpture take, start to finish?

Well, the answer, of course, is that they’re all different: Daub’s statues of Thomas Jefferson and Rosa Parks are single, stand-alone figures, whereas the National Salute to Bob Hope and the Military, located in San Diego’s Tuna Harbor Park, has enough figures to field a soccer team. And then there are the bas-reliefs, the one in the capital building of Montana being 18 feet long. Daub then mentions the Rosa Parks commission. “You do your initial drawings or whatever, then you’re selected as a finalist a couple of months later, and then you go through a process where you have to do research and come up with a maquette.” Another two or three months may go by, “and you’re waiting for their decision, and finally they make a decision; and now you’re ready to start tightening everything up and go into the final process, so that could easily take a year, or two years, or even three sometimes depending on the complexity of the piece.”