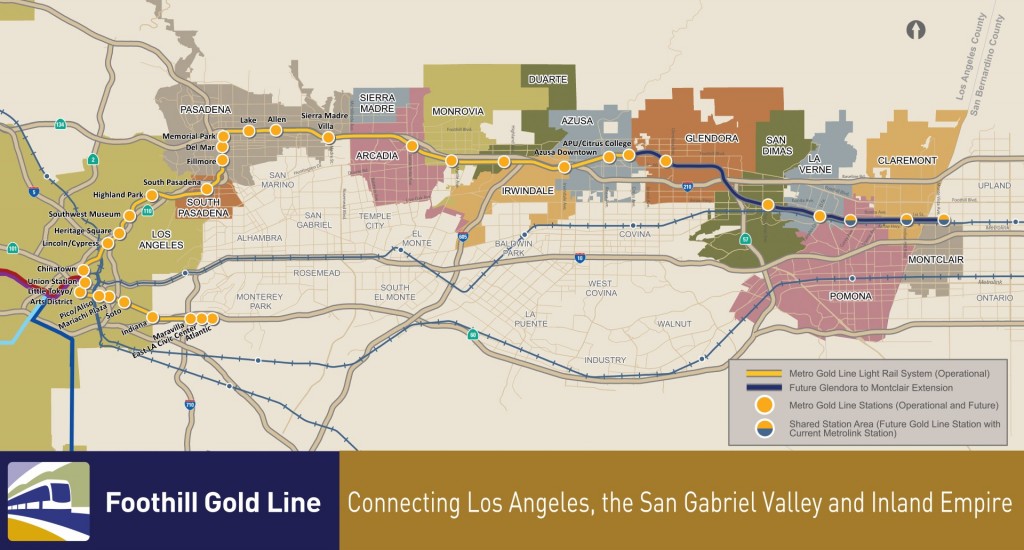 Last night, the Foothill Gold Line Construction Authority (Construction Authority) Board of Directors approved an updated project schedule for the 12.3-mile, six-station Foothill Gold Line light rail extension from Glendora to Montclair. The updated schedule is based on detailed constructability reviews conducted as part of the advanced conceptual engineering phase and a more extensive understanding that the next segment is really two major construction projects in one – first the freight and Metrolink relocations, and then the light rail system construction. The project will break ground in October 2017 and is anticipated to reach substantial completion in late-2025 to early-2026. The first year will be spent relocating utilities and conducting other pre-construction activities, and a design-build contractor is anticipated to be hired in late 2018.

For more information on the updated schedule, see the press release announcement below.

“Two projects in one,” the Glendora to Montclair extension will break ground this October and take about eight years to complete

“We have a more detailed understanding of this project and how we will build it,” explained Habib F. Balian, CEO of the Foothill Gold Line Construction Authority. “It is really two major projects in one – the freight and Metrolink relocation/reconstruction will have to be completed first, followed by construction of the light rail system. And to reduce risk for the future design-build contractor, the first year of the project will be used to relocate utilities and conduct pre-construction activities.”

The previously approved schedule, approved in 2015, had estimated completion in 2023; however, since then the Construction Authority refined the project scope through the ACE process and also put in place Master Cooperative Agreements (MCAs) with each of the project’s corridor cities, Metrolink and other third parties that provide more details on the project and how it will be built. The agency integrated this new information, including new constraints agreed to through the MCAs (such as constraints for grade crossing construction and Metrolink station and track relocation, and requirements to build several temporary rail detours), resulting in two years of construction being added to the project schedule.

“This is an important step in our project development process and a natural part of the progression of a major infrastructure project like the Foothill Gold Line as it advances through planning and design,” added Balian. “Our estimators and scheduling experts were given much more detailed information about the project and construction constraints and created a 7,000-activity construction phasing plan. This is the best information we have to work with until a design-build contractor is hired and provides their plan for the work.”

Based on this new schedule, the Construction Authority Board also approved an updated financial plan for the agency that incorporated a new project estimate for the Glendora to Montclair extension. The latest estimate confirmed that the construction costs in the previously approved 2015 estimate for the project remain accurate; however, costs associated with the additional two years of work, along with new prevailing and minimum wage increases that will take effect during construction, add about $118 million to the overall budget estimate for the project. The latest project estimate totals $1,374 million for the six-station Glendora to Montclair extension (including Los Angeles and San Bernardino County construction).

About the Foothill Gold Line Construction Authority – The Foothill Gold Line Construction Authority is an independent transportation planning and construction agency created in 1998 by the California State Legislature to plan, design and build the Metro Gold Line light rail system from Union Station to Montclair, along the Foothills of the San Gabriel Valley. The agency completed the first segment from Union Station to Pasadena in 2003 and the Pasadena to Azusa segment in 2015; both on time and under budget. The agency began work on the Foothill Gold Line from Glendora to Montclair in 2006. The Glendora to Montclair project was environmentally cleared in March 2013 under the California Environmental Quality Act (CEQA) and completed advanced conceptual engineering in September 2016. Future stations are planned in the cities of Glendora, San Dimas, La Verne, Pomona, Claremont and Montclair. Ridership on the extension alone is anticipated to exceed 18,300 boardings on weekdays by 2035. The majority of the funding needed to build the Glendora to Montclair extension is being allocated through Los Angeles County’s Measure M sales tax, which takes effect July 1, 2017.