Gold Line Bridge in Arcadia is a massive piece of art 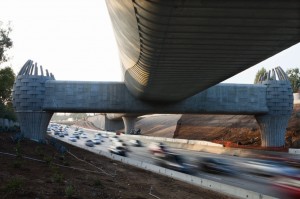 This article originally appeared on KPCC’s website on December 12, 2012.

People driving along the 210 freeway in Arcadia have some great artwork they can check out from behind the wheel. The massive sculpture is part of a bridge that was formally unveiled today  by transportation officials.

The bridge is part of the larger Gold Line Foothill Extension project. When the extension is completed in a few years, light rail trains will cross the bridge as they travel the 11.5 miles between Pasadena and Azusa. But people driving underneath the bridge can appreciate this nearly 600-foot long piece of art now.

“You know I’m so tired of seeing civil project for governments built in a way that really don’t reflect society or any artistic or aesthetic value,” he said. “And we had this opportunity [to] … do it for minimal cost to enhance the bridge with better architecture and some artistry.”

The supporting section runs perpendicular to the main bridge, and at either end sits a 25-foot high basket made out of woven concrete pieces. Each piece is six feet long and weighs 900 pounds. At the top of each basket are 16 concrete reeds, ranging from two to ten feet high.

British-born designer Andrew Leicester calls the bridge “sculptural history.” He said he created it to honor the native peoples and animals of the San Gabriel Valley.

“One layer, all upon another, all about transportation, moving people and moving goods,” he said. “And the baskets serve this function.  They’re kind of an ancient, one of the earliest vessels for carrying goods back and forth.”

In addition to the baskets, the underbelly of the bridge displays casted grooves and hatch marks similar to the patterns on a Western Diamondback snake.

Lead architect Rivka Night says it wasn’t easy to bring Leicester’s design to fruition.   “With the constraints and structural requirements, it was like give and take,” she said.

“I think that we have to finesse the connection plates that hold the reeds down to the baskets.  Those were engineered a little too aggressively, I think,” he said.

Contractor Lawrence Damore  with Skanska USA, said the job required his team to factor in a potential earthquake, because the structure sits near a fault.

“If you’ve noticed there’s some very long spans here,” said Damore. ” We’ve got about 200 feet between the columns.  And so it required a lot more reinforcement than usual and a lot higher strength concrete than we normally would have used.”

The Arcadia bridge will cost nearly 19 million dollars. It’s a small part of the overall Foothill light rail extension project, which will eventually connect Pasadena to Montclair at an estimated cost of $1.6 billion.   Gold Line officials say they are on schedule to finish the Pasadena to Azusa section by the end of 2015.