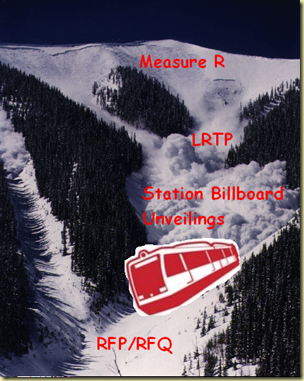 Look at the crudely crafted image above. What does it signify? If it hasn’t hit you by now, that’s the speed the project has gained since voters approved Measure R in November 2008. Since then, the Foothill Extension has been picking up lots of momentum (that crude image proves it), and we are now quickly closing in on the groundbreaking. So what’s next?

Well yesterday, the Gold Line Foothill Extension Construction Authority Board issued two bid packages for firms looking to build Phase 2A (Pasadena to Azusa) of the Extension. Please bear with us as we use some technical jargon you may never have heard before.

This is very good news and is important, because it keeps the project on track for breaking ground in June. And it gets us closer to creating the nearly 7,000 jobs and $1 billion in economic revenue from the construction of just this phase alone, as was revealed in the LAEDC’s economic impact report published earlier this month.

Duarte Gets Its Billboard Unveiling Party

Tomorrow, at the future site of Duarte’s Foothill Extension station, elected officials, business chambers, City of Hope employees, and various community members from the City of Duarte will congregate to celebrate the unveiling of their station billboard. The event takes place from 10 AM to 11 AM tomorrow, Saturday, at the future Duarte station at 1500 E. Duarte Road, Duarte, CA 91010. If you’re around the area, stop on by!

That Time of the Year: 2010 Transportation Forum (Tomorrow!)
Foothill Extension 101 – A Layman’s Lecture by Bob Davis; and Arcadia’s Time to Shine

Tell us who inspired you! Nominate your inspirational Pomona resident (past & present) ➡️ http://pomonapeoplepower.com