The following excerpt appeared in the San Gabriel Valley Tribune on September 27, 2017. To read the full article, click here. 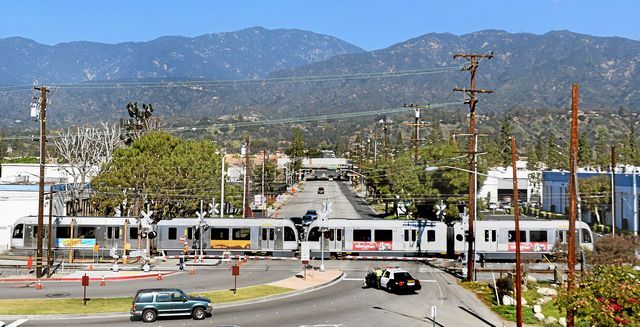 Foothill Gold Line train passes through Highland Avenue intersectionnear the Duarte Station Monday, February 9, 2015. Train testing has begun on the 11.5-mile Foothill Gold Line between Pasadena and Azusa, from Monday, through Summer 2015. Train testing is currently taking place in the cities of Duarte and Irwindale, and will expand to Pasadena, Arcadia, Monrovia and Azusa over the next several months.Systems integration testing is when the train is moving and they’re looking to see how it works together. Train will be running between Myrtle Avenue and Irwindale, back and at 15 mph.T(Photo by Walt Mancini/Pasadena Star-News)

The Gold Line Construction Authority board on Wednesday moved ahead with a 12.3-mile extension of the popular light-rail line by awarding the first contract for the project despite unresolved design disputes that could delay completion.

Bell Gardens-based infrastructure contractor W.A. Rasic Construction Co. will relocate the underground utilities along the route for an amount not to exceed $2.7 million. The company was chosen over four others in a competitive bidding process.

The job includes relocating existing sewer and water lines that cross the rail right-of-way and once completed, allows for the laying of light-rail track and overhead electric power lines.

That work — the bulk of construction — will be outlined in a second contract that will go to bid in the spring of 2018 and awarded in October 2018. The $1.5 billion project extends the popular Los Angeles-to-Azusa light-rail line farther east, from Glendora to Montclair, and is scheduled for completion in early 2026.