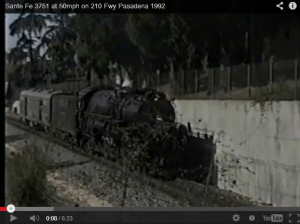 This week marks the 10th anniversary of Gold Line service beginning between Los Angeles Union Station and Pasadena. We’ll have some other posts as the week continues, but I thought it would be fun to start this one from YouTube user PhotoBoost.

What exactly is happening here? This is a steam engine that the then-Santa Fe railroad restored and ran to the L.A. area in 1992 as part of an employee recognition tour in 1992. The Gold Line was built on a very old alignment used for decades by Santa Fe and later purchased by local authorities to use as a transit corridor. The video begins with the train running past Memorial Park in Pasadena and then continuing to the median of the 210 freeway.

The train then goes beyond the final station of the Gold Line — Sierra Madre Villa — and continues along the alignment to be used by the Gold Line Foothill Extension project that is currently under construction and will extend the Gold Line for 11.5 miles to the Azusa/Glendora border. The video ends with the train crossing the old bridge over the eastbound 210 — the Foothill Extension rebuilt it from scratch. The very last shot is from a train model at the L.A. County Fair.

For more info, watch the video at YouTube and read PhotoBoost’s description of the video. Fun stuff!