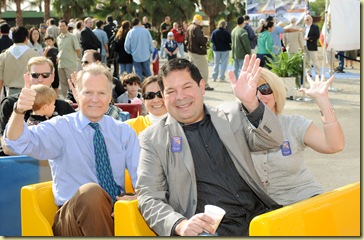 “To look backward for a while is to refresh the eye, to restore it, and to render it the more fit for its prime function of looking forward.”
– Margaret Fairless Barber

Now I may not be familiar with the writings of Margaret Fairless Barber (this might be the first time I’ve ever typed out her name), but if there’s one quote I could find on the internet that could describe the tone at Saturday’s celebration – this would be it.

This past Saturday, dozens of elected officials, hundreds of San Gabriel Valley residents, along with Metro CEO Art Leahy and Board Chair Ara Najarian came out to the historic Santa Fe train depot in Monrovia to celebrate last month’s hard-fought victory and to witness the unveiling of the first of six station signs at the future Foothill Extension stop – all the while looking forward to a brighter future for the region. There was food, coloring book tables for the kids, and a kiddie train that, for a brief moment, was being driven by Congressman David Dreier with Authority CEO Habib Balian and a few elected officials as passengers (more on that later).

Elected Officials Remind Crowd of Past, Look Forward to Future

While the event was a joyous occasion to celebrate the prospect of thousands of new jobs, economic benefits, a cleaner environment, and more transit alternatives for the folks of the San Gabriel Valley, it also marked a time for our lawmakers to reflect on the difficult and hard-fought path that brought us to this point.

Monrovia Mayor Mary Ann Lutz, while thanking every Foothill Extension supporter from top to bottom, took a quote from former British Prime Minister Margaret Thatcher in saying, “You may have to fight a battle more than once to win it.” If you’ve been a supporter these past few years, that’s a pretty good way to sum it up. Assemblymember Anthony Portantino stated that the incredible levels of support from all levels (from residents all the way up to our federal delegation) was an indicator of just how important the Foothill Extension was to the region. Not to take anything away from other transit projects, but very few other projects can claim they’ve had this level of support for years – even from their federal delegation.

Speaking of federal delegations, Metro Board Chair Ara Najarian – with the infamous Congressional letter still in mind – reminded the crowd (besides that Metro CEO Art Leahy was in the crowd wearing a USC cap and that he was a Gold Line fan at heart) just how fortunate we were to have the likes of Congress members Judy Chu, Adam Schiff, Grace Napolitano, and David Dreier fighting endlessly for the San Gabriel Valley. Despite a few heated debates going on these days in the House of Representatives, they took the time when it mattered most to make a strong stand for the region. Bravo. 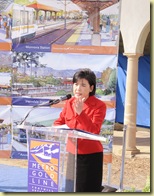 However, according to Congresswoman Judy Chu, it doesn’t end there. During her speech, she shared with the crowd that she dreams of the line going all the way to Ontario Airport. Not only do our residents share that dream as well, but so does former Glendale mayor and current California Transportation Commissioner Larry Zarian – who stressed that he was a fan of the line going to Ontario and that our economy depends on a healthy transit line that connects people to work.

Highlighting the speech portion of the ceremony was Congressman David Dreier, who reminded the crowd that we all share responsibility for our region’s environment – and that the Foothill Extension was solving a county-wide regional issue because, while it

Where We Go From Here

There’s five more station signs we haven’t seen yet for the cities of Arcadia, Duarte, Irwindale, and Azusa (two). And then we head towards the groundbreaking in the early summer of 2010 – which also happens to be the FIRST groundbreaking of any Measure R rail project. Neat.