The following article appeared in the Tuesday, February 05, 2013 print edition of the Pasadena Star-News. 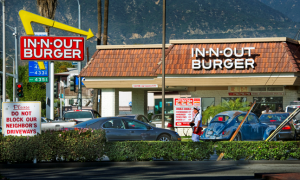 During work on the Gold Line’s Santa Anita Avenue bridge this spring, In-N-Out Burger customers will be asked to line up their cars on Colorado Boulevard rather than on Santa Anita Ave for the duration of the bridge’s construction Monday. (SGVN/Photo by Walt Mancini)

Gallery: Construction of Metro Gold Santa Anita bridge in Arcadia affects local businesses ARCADIA – Once the Gold Line Construction Authority’s five-month closure of a portion of Colorado Boulevard ends in April, commuters and businesses including In-N-Out Burger will endure major construction on Santa Anita Avenue for another bridge at the railroad tracks.

The Colorado Boulevard and Santa Anita Avenue bridges are among the more than 20 being built or modified to make way for the $735 million, 11.5-mile Foothill extension from Pasadena to Azusa.

For six months starting in April, Santa Anita Avenue will be reduced to one lane of traffic in each direction, officials said.

“It will be a challenging time because Santa Anita is a pretty busy street,” said Kevin Goodman, a segment manager for Foothill Transit Constructors, a Kiewit-Parsons joint venture.

As for the popular In-N-Out Burger, a plan is to get vehicles to enter and queue down onto the Colorado Boulevard entrance only rather than on Santa Anita, where cars are often lined up on the street, said Dan Kulka, FTC’s community relations liaison.

“The plan is to sort of detour the queue down onto Colorado so they’ll be westbound on Colorado kind of waiting in the middle there because it’s a wide enough street and we’re going to try to retrain them to queue that way,” Kulka said. “We’ll start a month ahead and they’ll actually hand them out flyers as they come through the window since they have a lot of repeat customers. We’ll give them a map and they’ll be signs out there.”

Gold Line officials are coordinating with In-N-Out and other businesses in the area that will be affected.

“All businesses will be accessible during this time; a little difficult to get there but accessible,” Kulka said. “We’ll have `Open during Construction’ signs, and we’ll work with them … We’ll just have to make it through these four months.”

But some In-N-Out customers Monday said the temporary changes might prompt them to go elsewhere.

“I probably won’t come here anymore; it’s too much inconvenience for me,” said Denise Keys, an Altadena resident who was queued up for a burger Monday on Santa Anita. “It’s going to be backed up if you’re entering from one side.”

Carl Van Fleet, vice president of planning and development of In-N-Out Burger, said they are familiar with the Gold Line project and are working with the Foothill Transit team “to make sure we cooperate with them while maintaining convenience for our customers.”

Michael Goldstein, owner of Goldstein’s Bagel Bakery, said the southernmost entrance of his business on Santa Anita, which is used for drive-thru traffic, will be fully closed for several months, forcing all vehicles to enter from the restaurant’s northern entrance on Santa Anita.

About one third of the bakery’s business comes from the drive-thru window. While that will remain open during construction, Goldstein said he feared business might be reduced so much that he might have to lay off employees.

“People will be discouraged to go through this right turn (into his business) because there will be a whole lot of stuff, a whole lot of distracting … and also people won’t want to go out on Santa Anita because it’s double the traffic,” he said.

Following the Santa Anita bridge completion and the 2013 Breeders’ Cup on Nov. 2 and 3, FTC crews will begin expanding the existing bridge on Huntington Drive at Second Street. While Huntington will stay at two lanes, drivers will not be allowed to turn left from Second Avenue, Goodman said.

The Construction Authority has opened a new Arcadia community office at 400 North Santa Anita, Suite 101B that is open Mondays and Wednesday from 8:30 a.m. to 4:30 p.m. to address questions and concerns. Residents can also call the Foothill extension’s project hotline at 626-324-7098.