The following article appeared in the November/December 2015 issue of USGBC+ Magazine. 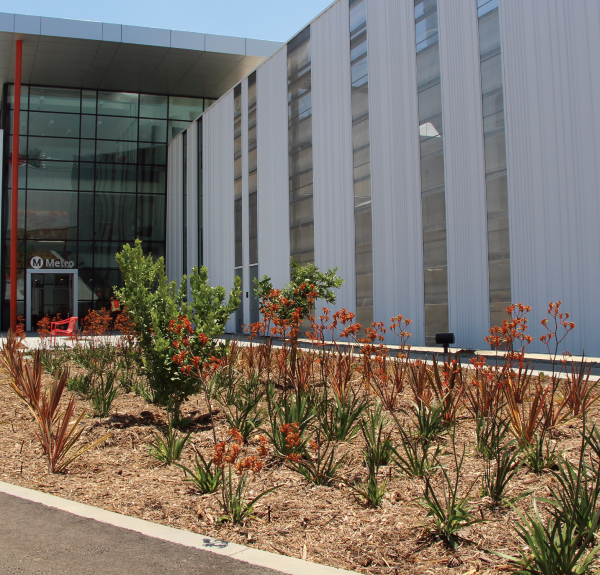 A maintenance facility that services an entire metro system’s fleet does not readily lend itself to sustainable design, never mind the U.S. Green Building Council’s (USGBC) Leadership in Energy and Environmental Design (LEED) Gold certification. At least that was the thinking at the start of the two-phase Foothill Gold Line light rail project from Pasadena to Montclair—the second phase of which was to include the building of an operations and maintenance facility as part of the Pasadena-to-Azusa segment. However, when key players from the Los Angeles County Metropolitan Transportation Authority (Metro), Parsons architects, and Kiewit Construction came together to look at what could be done, they decided LEED Silver certification was within reach—and then, much like the rail itself, they reached a little further.

In 2011, in the city of Monrovia, a 24-acre parcel of land—once home to a collection of 40- to 50-year-old light industrial buildings—was selected as the site on which to build what is now referred to as the Gold Line Operations Campus. Located just south of the I-210 freeway, the $265 million service facility was built to maintain Metro’s growing fleet of light rail vehicles; it houses up to 84 such vehicles and serves as a workplace for 200 employees—24 hours a day, 7 days a week.

Foothill Gold Line Construction Authority CEO Habib F. Balian has been part of the project since phase one, which extended from Union Station to Pasadena, and he played a large hand in the environmental planning and construction of phase two—from Pasadena to Asuza. At its inception, the design-build contract addressed rail alignment, the I-210 bridge, and the parking facilities. “We had a very tight budget going into this and did not really consider there was potential opportunity for any kind of sustainability features,” notes Balian. Between the rail, the parking lots, and the stations, he explains, there didn’t seem to be a lot of options. But when it came to the maintenance facility and campus, “a light bulb went off” and they started thinking seriously about incorporating sustainable design elements. 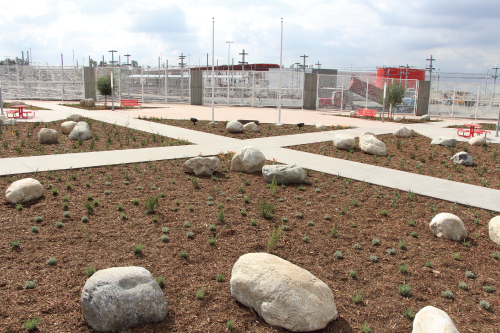 Planting a variety of drought-tolerant plants reduces landscape water consumption at the campus by 50 percent.

Balian credits major developments in the solar industry as playing a large role in changing their way of looking at the design. They adopted the attitude that sustainable features were indeed possible. “If there’s a chance to retrofit something in without slowing our schedule or making major modifications to the design, then we should do that,” says Balian.

Enter Roland Genick, chief architect (with Parsons) of Rail and Transit Systems. “It became clear…that with some additional efforts, LEED Gold was actually within reach,” recalls Genick. “With Parsons as the designer and Kiewit as the builder, we huddled together to identify additional opportunities.” 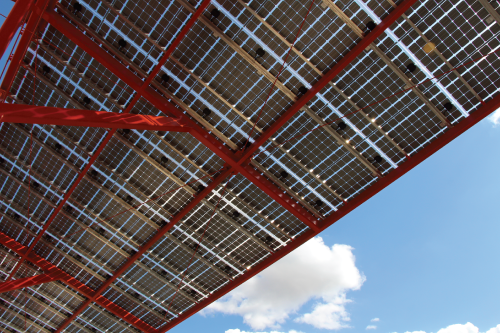 First, they found ways to capture rainwater using filtration systems to collect, clean, and direct water down into the ground. Drought-tolerant landscaping with state-of-the-art smart irrigation systems were added; solar-powered skylights were introduced; energy-saving sensory detectors were placed throughout the facility; and the building was physically configured to monitor power usage. Ultimately, given their large canopy, they even brought in a solar array. “These were things we never thought we would be able to do,” says Balian. “Once it became clear these things were feasible, we found we could spend a little more time and additional dollars to make upgrades that were good for the environment and made sense. We thought being sustainable was something that was very good for Metro long term.”

The full-service, state-of-the-art facility will house up to 84 light rail vehicles and nearly 200 employees over several shifts a day. Water-reduction measures in the Main Shop Building (such as high-efficiency fixtures and infrared sensor faucets) were employed to help achieve a 35 percent water reduction level.

With regard to the stormwater treatment system, its designer, Jennifer Hall, says, “The intent was to utilize as much space underground as we possibly could [so as] not to impact what they wanted to build out.” Toward that end, they employed a CDS unit to filter oils and sediments from water being directed into the storage system, which will ultimately infiltrate the clean water into the ground. By doing so, they are “renewing the resource daily.” The underground storage chamber’s footprint is all “gravel,” sized for water-quality flow. Any water that ends up in the storm drain is contaminant free. Given the complex and extensive conduit system on site, the infiltration system was divided in two—one part sits under the parking area, the other is in the southwest corner.

In the end, they managed to take six acres of previously impervious conditions and turn them into an area capable of absorbing water. They did, however, need to tie into an existing (and already taxed) city storm drain system, but being able to absorb water elsewhere assuaged additional pressure on that system during flooding. “This changed how long it would take for the water to get from the northeast corner of the campus to southeast corner. If you were to follow the raindrop, we significantly increased the amount of time it [takes.] We helped to alleviate any downstream constraints.”

Carmen Cham, a senior architect with Parsons, points out how unique the railyard site is: “So much of the underground infrastructure has not only to do with the utilities but also the electrification of the trains.” The space was, therefore, very limited when it came to stormwater storage. On the other hand, it was loaded with ballast, which helped a great deal with infiltration of rainwater and its introduction into the ground.

Given the Operations Campus is located in the heart of Monrovia and, therefore, surrounded by a residential community, the Construction Authority strove to find ways to promote sustainability throughout the campus to help mitigate the impact of such a large facility on the neighborhood. They did everything they could to weave the campus into the environment and make it aesthetically pleasing from its two visible sides, including the planting of citrus trees and a drought-tolerant landscape, the installation of benches and picnic tables, and the construction of “linear parks.” They even made a deal with the community to turn a triangle-shaped piece of property on the northwest corner into an open-to-the-public viewing portal overlooking the railyard. “We knew people were always going to be interested in knowing what was going on,” says Genick.

In terms of attaining LEED Gold certification, Genick says: “It’s important to note, from an approach standpoint, that as you are going through the [USGBC] scorecard…[it] wasn’t written with a maintenance facility in mind. Understandably so, there aren’t that many.” Without a model to follow, the team tried to stay true to the certification’s criteria, but they made necessary adjustments to accommodate the building’s highly particular function. They also wanted to be smart about how they were evaluating all the mechanical systems. “There isn’t necessarily a standard value for energy and water consumption as there would be for a traditional office building,” notes Genick. So they carefully considered the building’s primary purpose: to support the construction and maintenance of trains. “We were building this for an agency that is going to be in this building for the next 100 years,” notes Cham. Daylighting was important, particularly in the shop area, where a number of skylights were introduced to minimize the need for artificial lighting. Throughout the facility light sensors dim based on occupancy; others detect the amount of existing natural light and dim accordingly. The HVAC system was designed to be as efficient as possible, and they used all white roofs to avoid heat island effect. Furthermore, recycled steel and concrete were used throughout the project. (For the shop’s construction they even reused rail line.) “We were almost at the end of the design when the Authority approached us about getting additional credits,” says Cham. “That’s when a [solar] array system was introduced onto the site.”

Because the Construction Authority was only responsible for the planning, design, and construction of the project, while Metro owns and manages all operational elements, including the Operations Campus and the six-station light rail system, the team worked with Metro’s sustainability coordinator to be sure no features were implemented that could not be sustained over time. From the start, Metro was aware of what they would be responsible for, and they committed to maintaining both the operation and its certification. “They knew what they were getting and they are invested,” says Cham.

Today, the Gold Line Operations Campus comprises a main shop building; a car wash facility; a maintenance-of-way equipment storage canopy (the structural support for the campus’s solar power array, which produces nearly 22,000 Kilowatt-hours of electricity per month); a car cleaning platform; a materials storage building; storage tracks, where light rail vehicles are kept when not in use; and a 600,000-gallon fire reserve water tank and attendant pump/hydrant system.

Compared to other Metro facilities, this is a much improved work environment for employees. “We approached it in a very different way. We call it a campus instead of a maintenance or railyard,” explains Balian, noting that the initial design proposal looked more like a prison, which, given its location in the middle of a community, didn’t seem like a good idea. “The biggest challenge was getting the community’s buy-in,” he says. “We wanted to be generous to the community and do nice things for it. I think we did a whole lot to create a nice environment for the people who are going to be working there.” Beyond that, they enhanced the neighborhood with upgraded intersections and better street lighting. “That’s the great thing about these projects,” says Balian, “they are catalysts for improvements in the neighborhoods, and that’s what this did.”