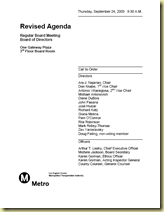 After a two month hiatus, the Metro Board of Directors is set to host another monthly board meeting. If you recall from the last public meeting in July, this meeting was supposed to be the day the Metro Board voted on the Long Range Transportation Plan – along with their plan to pursue federal funding for certain preferred projects as well. But like Board member Richard Katz remarked in July, “MTA never fails to miss an opportunity to delay,” the opportunity has been delayed once again. The discussion and vote has moved to their October meeting. However, that’s not the source of our recent frustrations and questions.

A lot (kind of) has happened since the Board reintroduced and discussed federal funding at the July meeting. First, we found out that a lot of the federal stimulus dollars in California went to projects that didn’t exactly fit President Obama’s preferred criteria: ready to build, creates jobs, reduces congestion and pollution – criteria that the Gold Line Foothill Extension can meet. Second, in a good show of putting differences aside, the Subway to the Sea’s biggest supporters – including Mayor Villaraigosa and Supervisor Zev Yaroslavsky – called for a unified effort to get as many rail projects (including the Foothill Extension) into a federal funding agreement with Washington.

Third and last, which as you will see deserves its own paragraph, Mobility 21 – a regional transit coalition of which Metro is a part of – recently held a conference to identify Southern California’s biggest transit needs. Out of that conference came the conclusion that only two transit projects should receive federal funding: the Subway to the Sea and the Regional Connector. By using Measure R’s tax revenue (the same revenue that millions of San Gabriel Valley residents contribute to when sales tax increased half a cent in July), the plan is for Metro to show the federal government that they have used enough local funds to warrant federal funding. Let’s try to talk rational for a second and see the problem with the outcome of the Mobility 21 conference – as explained by Azusa Councilmember Keith Hanks:

“It looks to us like the other projects are 10 years away from needing federal money.”

That should say it all.

We’ll be covering tomorrow’s Metro Board meeting on Twitter @iwillride, and hopefully we’ll get to see how the situation/issue turns out. The meeting takes place at the Metro building at 9:30 AM.

How to Sound Like an Expert on All Things Gold Line Foothill Extension
Judy Chu Highlights Metro Board Meeting, Still No Answers from Metro