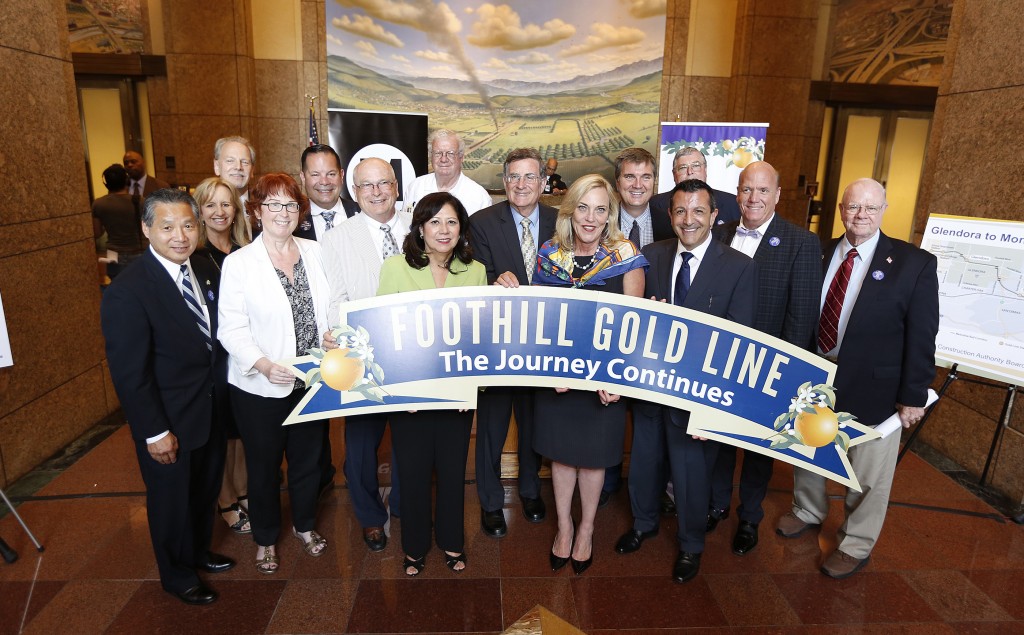 Today, the Los Angeles County Metropolitan Transportation Authority (Metro) Board approved the $1.4-billion funding and partnership agreements between Metro and the Construction Authority for the construction of the Los Angeles County portion of the Foothill Gold Line light rail project from Glendora to Montclair. The partnership agreements establish a funding plan and shared roles and responsibilities between the two agencies, as the Construction Authority will build and complete the Foothill Gold Line before turning it over to Metro for passenger service.

The Foothill Gold Line is being funded by Los Angeles and San Bernardino Counties. The portion of the project within Los Angeles County (Glendora to Claremont) is being mostly funded by Metro’s Measure M half-cent sales tax that was approved by voters in November 2016, as well as residual Measure R funds from the Pasadena to Azusa segment that was completed under budget. The portion from Claremont to Montclair will need to be funded by San Bernardino County.

The Foothill Gold Line will be the first transit project in Measure M to begin construction when it breaks ground on October 21, 2017. The groundbreaking ceremony will take place at Citrus College in Glendora, CA. More ceremony details will be provided in the near future.

The Los Angeles County Metropolitan Transportation Authority (Metro) Board today approved a $1.4-billion budget and partnership agreements to extend the Metro Gold Line in the San Gabriel Valley another 11.5 miles east to Claremont.

Partnership agreements establish a funding plan and shared roles and responsibilities between Metro and the Foothill Gold Line Construction Authority, the agency that will build the extension. Metro will fund the portion of the new segment from Glendora to Claremont within Los Angeles County. The Construction Authority plans to utilize other funding to complete the line to Montclair in San Bernardino County as part of the overall project.

The extension will be the first rail line to begin construction from a multitude of new transit projects funded by Metro’s Measure M half-cent transportation sales tax approved by L.A. County voters in November 2016.

“This second phase of the Foothill Gold Line is truly significant because it’s the very first Measure M transit project out of the gate,” said John Fasana, Metro Board Chair and Mayor Pro Tem for the city of Duarte. “It will establish the early momentum we need to launch our ambitious new traffic improvement plan that will yield tremendous transportation benefits for the entire Los Angeles County area.”

Under the terms of the funding agreement, Metro will use Measure M and other local and state funds to pay for construction. Metro plans to apply for a $249-million grant from the state’s Transit and Intercity Rail Capital Program to complete life-of-project budget requirements. Should that funding be unavailable, Metro will pursue other options and approaches to meet the full funding needs of the project. The Board also approved the transfer of an additional $26 million in cost savings from the Construction Authority’s Gold Line segment to Azusa, which opened in March 2016. Combined with previously approved savings, nearly $100 million of residual Measure R funds dedicated for the full Foothill Gold Line project will be used to complete the next segment from Glendora to Claremont.

“Today is a major milestone for our agency and the residents, students and workers of the project’s corridor cities who eagerly await the Gold Line’s arrival,” said Doug Tessitor, Chairman of the Construction Authority Board of Directors. “We thank Metro for its continued partnership and support of the project – especially Chairman Fasana for his dedication and commitment. We look forward to working together to make this next project as successful as the previous Gold Line segments.”

The Funding Agreement and Master Cooperative Agreement define the working relationships and processes needed for Metro to fund work and collaborate with the Construction Authority. These agreements set the foundation for identifying and implementing a detailed budget and means for disbursement, tracking and management of funds, safety and quality throughout the course of the design-build project.

“This project will create a critical new transit connection for Los Angeles, the San Gabriel Valley and Inland Empire areas when it’s completed,” said Phillip A. Washington, Metro CEO. “The Foothill Gold Line Construction Authority is a great partner in helping us expand our public transportation infrastructure.  We look forward to partnering with them to deliver this project on-time and on-budget.”

The extension will provide a safe, reliable transit alternative to driving the busy 210 and 10 freeways and offer a connection with Metrolink’s San Bernardino Line. A planned extension from Claremont to Montclair will add about another mile when funding is secured. A trip from Montclair to Pasadena should take just over 40 minutes, and a trip from Montclair to Los Angeles would be about 75 minutes.

To date, the Construction Authority has environmentally cleared the project and completed advanced engineering for the entire alignment. The authority expects to award its first contract for advanced utility relocation later this year. The project’s official groundbreaking is planned for October, with plans to open to the public by 2027.