Amidst a flurry of editorials, stern lectures from Congressional representatives (as well as State legislators), and staged protests from bus riders in front of Metro headquarters, the Metro Board of Directors came in yesterday with their game faces on and with the intent of passing the 2009 Long Range Transportation Plan. After we pointed out during our live-tweet that the Board room computers were running the archaic Windows 98 operating system, just as the Directors were lining up to vote on the LRTP – the computers crashed. That didn’t stop them as the Board went the old-school roll call route and voted unanimously to pass the 30-year Long Range Transportation Plan.

But considering it took until 2 PM to cast the vote (the meeting started around 10 AM), there was a lot that happened before the Board was able to arrive at that point.

Largest Contingency of Foothill Extension Supporters (this year) Show Up 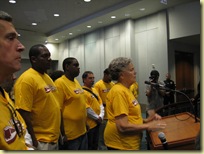 Not to be outdone by bus supporters (three of them dressed in devil costumes) who filled up three long rows worth of seats, more than 100 supporters – ranging from elected officials to community leaders to residents and students – from the San Gabriel Valley made the trek to Metro headquarters to make one last stand for the Foothill Extension. If you live in a city along the 210 freeway up to Ontario, you were represented.

The San Gabriel Valley delegation of federal, state, and local legislators took to the stand first for public comment on the LRTP. Seeking to carry the momentum from the bipartisan Congressional letter that was made public a few days ago, the federal and state legislators reiterated concerns that Los Angeles County stood to lose out on hundreds of millions of dollars over the next few years if the Board did not expand their federal funding strategy to include the Foothill Extension (Azusa to Montclair), Crenshaw corridor, and Eastside Extension Phase II projects. Representatives of state legislators Anthony Portantino, Carol Liu, and Gloria Romero reminded the Board that the voters who approved Measure R made it clear they wanted projects to move into construction as soon as possible – a criteria that the Foothill Extension was more than qualified for. A letter signed by eight state elected officials was also submitted to the Board in support of a more inclusive funding strategy.

If you read yesterday morning’s Los Angeles Times editorial take on the federal funding drama, you might have been surprised (at least I was) to read the Times’ claim that the federal government rarely funds more than one project at the same time. Not letting this tidbit get by them, a bipartisan Congressional delegation of representatives on behalf of David Dreier, Adam Schiff, Judy Chu, Grace Napolitano, Joe Baca, and others responded during public comment that, despite the editorial’s claims, it was not uncommon to have several projects funded by the federal New Starts program at the same time. If you go back to the infamous signed letter from a few days ago, it actually lists examples of this happening.

The local delegation (pictured right) was led by Glendora City Councilman Doug Tessitor, Duarte City Councilwoman Lois Gaston, Monrovia Mayor Mary Ann Lutz, and Monrovia City Councilman Joe Garcia. The most interesting comments from the local delegation came from the Monrovia representatives, who – like we previously reported – reminded the Board that the city of Monrovia has the land and resources necessary for the much-needed rail maintenance facility, but the city will only commit as a partner to this yard if Metro agrees to operate the Foothill Extension (to Azusa in 2013). To show how serious they were, Mary Ann Lutz stated that the city prefers not to have the yard, but they are willing to host it in return for the Foothill Extension.

Speaking of local elected officials, county-uniter and West Los Angeles Councilman Bill Rosendahl stated in his public comment his support for the Congressional letter and the idea of including more projects in Metro’s federal strategy.

Board Responds to Congressional Letter

With the bipartisan Congressional letter having taken the transit news circles by storm, there was no way the Metro Board was going to ignore it.

In the Chair’s report, Ara Najarian talked about going to Washington in an attempt to lay the groundwork for federal funding for the Subway and Regional Connector. After feeling like he had accomplished something, he was blindsided and put on the defensive when the Congressional letter surfaced. In response to the letter, Najarian stated that Metro had not done a good job of briefing our federal representatives on their local strategy – that there were details that our members of Congress were not aware of. In the end, Najarian’s message was simple: let’s all get our act together.

Ridley-Thomas, Antonovich, Fasana, and Molina Stand Up for Regional Equity

When it was the Metro Board’s turn to discuss the LRTP prior to their vote, much of the lengthy debate had centered around a motion drafted by Board members Mark Ridley-Thomas, Gloria Molina, Michael Antonovich, and John Fasana. Without going into the details of the debate (in which Ridley-Thomas, Antonovich, Fasana, and Molina argued for regional equity until the very end), the motion eventually was included as an amendment in the final LRTP, which helped ease most of the concerns about the Foothill Extension’s future. So here’s what’s in for the San Gabriel Valley.

With $851 million allocated for the first phase of the Foothill Extension in the prior draft of the LRTP, the lingering concern was the operational date set by Metro for 2017 – which meant the line would run almost 4 years after the expected completion in 2013. While not placing into writing an operational date of 2013, the amendment to the LRTP requires that Metro operate the line if the Construction Authority can complete it before 2017. Let’s see what happens.

Funding for Phase to Claremont

In addition, like the first phase, Metro is required to commit to operating the line as soon as it is built.

So, let’s get to that groundbreaking in June, shall we?

For a breakdown of the overall issues, you can pick from a range of reports from the Los Angeles Times, Pasadena Star-News, LA Streetsblog, Curbed LA, and The Source (Metro’s official new blog).