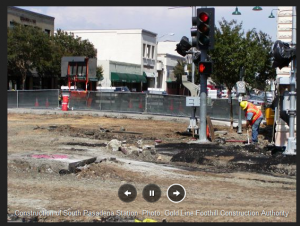 On Friday, July 26, 2013, the Metro Gold Line will celebrate 10 years of progress. Only 13.7 miles long at its inception, the Gold Line opened to the public on July 26, 2003, carrying riders from Los Angeles Union Station to Pasadena. The line was initially known as the Pasadena Blue Line. It wasn’t until November 2001, a little more than a year after construction began on the line, that the Metro Board changed the name to the Gold Line.

Over its 10-year existence, the Gold Line has carried nearly 81 million riders – about equal to the population of Germany! – and exceeded all expectations. Taking that many people out of cars is equivalent to removing 11,335 cars from the road, or eliminating 112,263 metric tons of greenhouse gas emissions. Not too shabby for 10 years of work.

The construction of the Metro Gold Line created thousands of jobs, and even more were created as new Joint Development Projects cropped up along the line. Four of these projects are completed – Union Station, Fillmore, Del Mar and Sierra Madre Villa Phase I – and 6 more are in the works, putting housing and business space mere steps from the tracks.

Each Metro Rail line has a unique identity, and the Gold Line provides one of the most scenic rides on the Metro Rail system. There’s nothing quite like gliding over the Arroyo Seco Parkway in the fall, looking out the train windows and seeing brilliant red foliage all around. And as with all other Metro Rail stations, all the stations along the Gold Line contain art – whether it be the pagoda design at Chinatown Station or the fun, over-sized flowers at East L.A. Civic Center Station.

“The Metro Gold Line is an integral part of the Metro Rail system, providing a vital link for residents of East Los Angeles and the San Gabriel Valley to the rest of the region,” said Metro Board Chair and Lakewood City Council Member Diane DuBois. “We are excited to be celebrating 10 years of rail service along the first segment of the Gold Line to Pasadena and are looking forward to the completion of the extension to Azusa, providing additional travel opportunities for the region.”

Funded by Measure R, the Gold Line Foothill Extension is currently under construction and is a welcome addition to Metro’s expanding rail system. Once it’s completed – along with Expo Line Phase II to Santa Monica, the Crenshaw/LAX Line and the Purple Line Subway Extension into West L.A. – Angelenos will find themselves with more transit options than ever.

So this weekend, why not celebrate the Gold Line by going for a ride? There’s plenty to explore at every station (LAist has a fun guide detailing Pasadena to East L.A.) and you can easily connect from the Gold Line to the Red or Purple Line at Union Station. Take advantage of Metro’s Destination Discounts program while you explore and save on shopping, dining and fun just by presenting a valid TAP card.

In addition, evening service on both the Metro Gold and Expo lines has recently increased to every 10 minutes until midnight, making Metro Rail even more convenient and accessible from one end of the county to the other.