The following article appeared in the Pasadena Star-News on January 18, 2014. 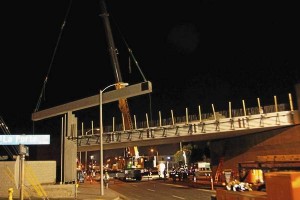 MONROVIA >> Amid the potential headache of construction detours, businesses are gearing up for the four-month closure of Myrtle Avenue at the railroad crossing north of Duarte Road, and hope customers will continue to patronize their stores.

The closure, which begins Monday, is part of the Metro Gold Line Foothill Extension light rail project, which will extend the Gold Line 11.5 miles from Pasadena to Azusa. It is the first significant closure caused by Gold Line construction in Monrovia that has a direct impact on businesses, according to Mayor Mary Ann Lutz.

Brenda Trainor, co-owner of Wonder Dog Ranch, which is south of Duarte Road, said she wished she knew about the closure several months in advance so she could have better prepared.

The Gold Line has provided custom-made maps to give to customers explaining the detour, she said.

“I think my current customers are going to figure it out and not have any problem with it,” Trainor said. “Where I expect there to be more of a challenge is for those customers that have never been here before.”

Attracting new customers is important, Trainor said, as the dog day care and boarding business is only a year old.

Trainor said she had advertised that the ranch had easy access from the 210 Freeway.

Espy Fajardo, a manager at The Wizard of Bras, which is north of the closure, said she’s worried potential customers will avoid the area because of the detour.

“One (concern) is that our business is going to go down because people aren’t going to go around,” she said.

The closure will last through May, according to the Gold Line construction authority.

Duarte Road will remain open. Pedestrians will have access through Myrtle Avenue on one side of the street.

Both Trainor and Lutz praised Gold Line officials for communicating with the city and the affected businesses.

“We’re already talking about ways to help each other out, and we’re determined to make a good batch of lemonade out of this closure,” she said.

Lutz said while the community in the short term has to deal with road closures and detours, in the end it’ll be worth it because the Gold Line will be brought into the city.

“We’re going to weather the construction storm for the next year and a half and hopefully it’ll all work out and the businesses will be OK and will be made whole, so to speak,” she said.

Trainor, too, said the construction headache will pay off.

“It’s an inconvenience, it’s a rerouting, but quite frankly, it’s worth it to get the Gold Line into town,” Trainor said.