The following article originally appeared in the Pasadena Star-News website on Tuesday, May 28, 2013. 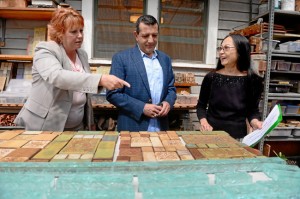 PASADENA — Artist Cha-Rie Tang’s passion and deft hands in making Craftsman tiles is evident on a recent tour of her Pasadena studio, where she’s been consumed with creating the elaborate artwork for the future Monrovia Gold Line station on the Pasadena-to-Azusa foothill extension.

The concept of the Monrovia station’s artwork, dubbed River of Time, aims to celebrate “man in harmony with nature” and draws on both the elements of nature and architectural features that are prominent in the small but proud foothill city.

“I wanted to tie together Monrovia’s love of Batchelder tiles, architectural history and their love of nature,” Tang, an architect and MIT graduate, said during a studio tour Friday that she gave to Monrovia Mayor Mary Ann Lutz and officials from the Metro Gold Line Foothill Extension Construction Authority.

Ernest Batchelder, who once directed the department of arts and crafts at Throop Poly-technic in Pasadena, was an Arts and Crafts master tile maker whose unique decorative style emerged in the 1920s during the Craftsman movement, which was popular in the Pasadena and San Gabriel Valley area. Some of the tiles Tang is using were cast from original Batchelder molds but most were impressions taken from original Batchelder tiles, including floral and animal motifs native to the region.

“I’m glad to have a chance to gather so many Batchelder tiles together,” Tang said. “I believe this is the largest collection of Batchelder designs in a public art project.”

Tang’s artwork for the station will include a 7-foot high sculptural rock carved by nature that is intended to signify a mountain and will be placed near the north side of the platform and surrounded by a pool of glass bricks she is making, which are meant to symbolize ripples of water. The work will also include watercolor field tiles that will flank the station’s pedestrian entrance ramp as well as a “treasure trove” of Craftsman tiles – many of which were reproductions of tiles gathered from fireplaces, kitchens and bathrooms of community members – that will be set on column bases on the station’s platform.

“I think (community members) are just going to be in awe of it,” Mayor Lutz said, noting how excited she was to see the station’s artwork come together after seeing a rendering several years ago. “I think people will stop and stare and look at it and enjoy it; they’re not just going to walk through. They’ll want to be a part of it for a while. ” 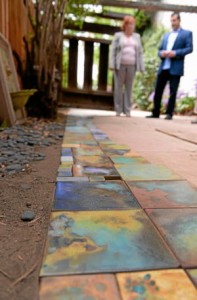 Lutz said she was particularly excited about how the artwork reflects the city of Monrovia’s history by connecting with the community’s love of Batchelder tiles as well as its love of nature. As for the large sculptural rock imported from southern China, “that rock is just amazing,” she said. “I only wish it came from our canyon but you get it where you get it but everything else is so true to our community. ”

While Tang has been making Craftsman-style relief tiles for about two decades, the first 10 years she was doing so in secret, she said, “because I wasn’t quite sure about using Batchelder designs” and she wanted to wait to get approval from Batchelder’s heirs, she said. Tang said she has been working on the project for about seven years, even though she didn’t get the contract with the design-builder Kiewit Parsons until earlier this year.

The total budget for the artwork’s fabrication and delivery is $143,000 plus another $15,000 for design, said Lesley Elwood, public art program manager for the Gold Line Construction Authority.

Under Elwood’s supervision, each city with a stop along the foothill extension had a public art committee that interviewed the artists and then narrowed down the concepts they wanted at their station, the authority’s CEO, Habib Balian, said.

“It’s just so different for public art to see this kind of quality that’s not just out there it’s indigenous to the area,” he said, noting that each station along the route is unique.