The following article appeared in the Los Angeles Register on August 5, 2014. 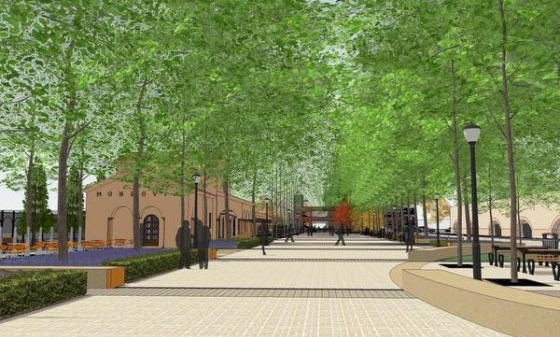 MONROVIA – A new community park, outdoor amphitheater and apartment complex built around the upcoming Metro Gold Line Myrtle stop will be open to the public by the end of 2015, in what city officials call the biggest infrastructure project in Monrovia history.

“Station Square will be a hub for community events, outdoor concerts, and a gathering place for commuters to sit, have a bite, and enjoy the space,” said Alexis Bakofsky, Monrovia’s public information officer. “We really want people to step off the train and arrive at a destination.”

The Station Square project, funded by $25 million in grants and outside funding, will break ground Sept. 1 after Monrovia city council awards the construction contract later this month.

The project is broken down into four main parts. As soon as commuters step off the Gold Line at Duarte Road and Myrtle Avenue, they will enter the Transit Plaza, which houses bicycle racks and bus shelters, as well as planted trees for shade.

The plaza feeds directly into a long walkway called the Depot Promenade, which runs along the city’s historic Santa Fe Depot where the railroad used to stop.

The depot itself is closed to the public, but officials hope enough money will be left over from the project to renovate the space and install a cafe or similar offering.

“City Council is passionate about restoration of the depot, which links Monrovia’s transit past to the present, but we won’t know about funding until we get bids from contractors,” Bakofsky said.

The promenade, which features benches and gathering spots along the walkway, will lead to a new neighborhood park at the corner of the intersection.

The planned park, which is a large concrete expanse, will be grassy and feature a children’s playground made of sustainable materials, as well as an outdoor amphitheater and public restrooms.

“We’re working very hard with our community services department to make sure we build infrastructure that will support different types of activities, from yoga to a farmer’s market to outdoor concerts,” said Bakofsky.

In addition to the onsite construction, the project will also involve off-site repairs like freeway beautification, landscaping, and fixing roadways, sidewalks, and medians.

The city also has several properties on sale across the street from Station Square it hopes will be developed into commercial spaces. Residential developer Samuelson and Fetter has already planned a 261-unit apartment complex adjacent to the Metro stop.

Monrovia officials expect construction to be completed by the end of 2015, the same time the Gold Line will be finished and tested by Metro. The Gold Line extension itself will be operational in early 2016. About $25 million in grants and local funding will finance the plan.

“This project is decades in the making,” Bakofsky said of Station Square. “Thanks to a combination of federal and state grants, money from Metro and the Construction Authority, Monrovia will not go out of pocket to fund it.”