The following article appeared in the Los Angeles Times on January 6, 2015. 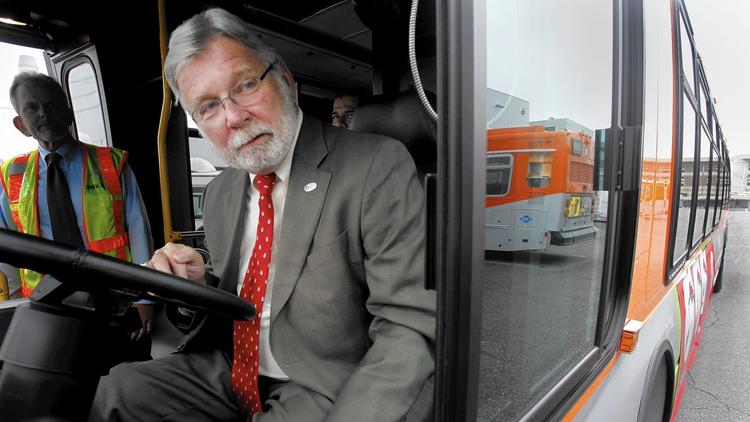 The chief executive of the Los Angeles County Metropolitan Transportation Authority said Tuesday night that he would step down in April after six years of overseeing both major milestones and high-profile embarrassments during the most ambitious rail construction period in the agency’s history.

Arthur T. Leahy’s performance as chief executive has been under confidential review by the Metro board of directors for more than six months, and a majority of members were ready to let his contract expire in April, according to sources familiar with the negotiations. In an interview with The Times, Leahy, 65, said leaving Metro was his choice.

Leahy’s departure comes during a crucial time for Metro, which is in the midst of a multibillion-dollar rail-building binge that has the potential to reshape the face of commuting habits, development and density levels in traffic-choked Los Angeles. Eight years after county voters approved a half-cent sales-tax increase to pay for those projects, Metro is on the cusp of asking for another levy that could fund a dozen more, including a possible rail and highway tunnel through the Sepulveda Pass.

Metro now must find a new leader who can coax more people out of cars and onto mass transit and help make the case for more taxes to help improve commute times across the county. The agency’s board of directors will choose Leahy’s replacement.

Leahy was hired as CEO in 2009, arriving in time to oversee the planning, construction and ribbon-cutting for the first handful of projects funded by Measure R, which will raise an estimated $35 billion over 30 years for a dozen transit projects. Five rail lines in various stages of construction will soon stretch from Santa Monica to Azusa and under Wilshire Boulevard, one of the most heavily traveled corridors in the U.S. Those lines alone will cost $8 billion.

“We’ve achieved a lot in a period of frugality,” Leahy said Tuesday. “I’m very happy about that.”

But Leahy also drew sharp criticism for projects that did not come in on time or on budget — most notably the 405 Freeway widening, which took five years to complete and cost hundreds of millions of dollars more than its promised $1-billion budget.

In a resignation letter obtained by The Times, Leahy wrote that Metro has “continued to maintain a balanced budget by controlling costs.” But the agency faces a deficit of $83 million in 2018, which could worsen to $248 million by 2023 as pension costs rise and new rail lines begin operating. In the last five years, the share of operational costs covered by fares has fallen from 29% to 26%, one of the lowest rates of any major transit agency in the world.

Partly at Leahy’s urging, the Metro board increased fares twice during his tenure, raising one-way fares by 40%, from $1.25 to $1.75. That drew bitter criticism from rider advocates, who accused Leahy of neglecting low-income, minority bus passengers in favor of glitzier rail construction. More than 90% of bus and rail riders have an average household income of less than $20,000, according to Metro data.

Leahy oversaw much of Metro’s efforts to wean itself from a decades-long experiment with an honor payment system on its trains. The agency spent more than $46 million to install turnstiles at more than half of Metro rail stations. Despite that, questions still linger about how many passengers find ways to ride for free.

In a statement praising Leahy, Los Angeles Mayor and Metro Chairman Eric Garcetti said “millions of people will get to work and home to their loved ones faster because of his stewardship.” And he applauded Leahy’s ability to coax more than $2 billion from federal officials to fund more rail construction.

Leahy grew up in Highland Park and began his transit career as a bus driver for the Southern California Rapid Transit District in 1971. Before joining Metro, he spent eight years as the top transit official in Orange County.

“Los Angeles County owes a debt of gratitude to Art Leahy,” Gary Toebben, president and chief executive of the Los Angeles Area Chamber of Commerce, said in a statement. “He was exactly the right person to lead the cavalry charge after voters passed Measure R in 2008.”