The following excerpt appeared in the San Gabriel Valley Tribune on March 5, 2017. To read the full article, click here. 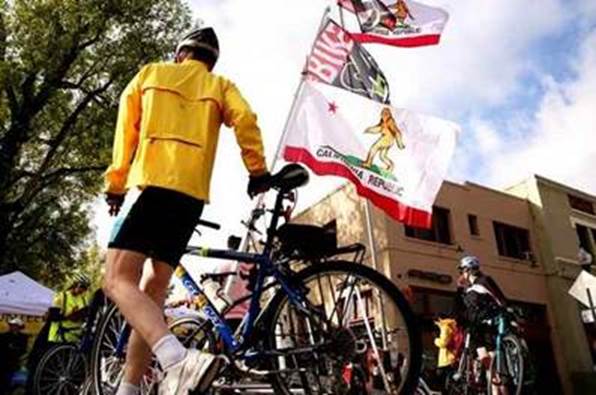 Bicyclists gather in South Pasadena before the start of the 626 Golden Streets event on Sunday, March 5, 2017. The event closed off 18 miles of streets between South Pasadena and Azusa for people to ride their bicycle, tricycles, scooters, skateboard, or walk or run. (Correspondent photo by Trevor Stamp)

Despite afternoon showers, about 100,000 people rode bikes, walked or ran an 18-mile carless course on Sunday through the streets of the San Gabriel Valley as part of the largest ciclovia-type event in North America.

The 626 Golden Streets brought out parents pedaling rusty Schwinn cruisers with their kids on bikes with training wheels, spandex-wearing racers, unicyclists, riders on tall bikes, teenagers balancing on one-wheeled electric skateboards, plus 600 runners of a half marathon.

More than a dozen streets were filled with a colorful array of human-powered vehicles along such major thoroughfares as Mission Street, Huntington Drive and Foothill Boulevard through seven cities: South Pasadena, San Marino, Arcadia, Monrovia, Duarte, Irwindale and Azusa.

“There were a lot of folks out there,” said Wes Reutimann, executive director of Bike San Gabriel Valley, the organizer of the event. “But the most gratifying was seeing all the families.”