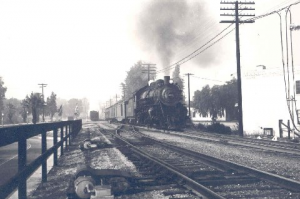 One of my railfan buddies sent this photo from 1938  (yes, it’s older than me).  This was taken in Arcadia and shows the Santa Fe LA to San Bernardino local, which I remember as Train 42.   It has just crossed First Ave.  and will probably cross Huntington Dr., since this was (I think) before the overpass was built.  In the distance the Arcadia Tower is barely visible–it controlled the crossing of the PE Monrovia-Glendora Line with ATSF.  It also controlled the lightly used SP Duarte Branch, which in 1938 started in Alhambra, came through San Gabriel and Arcadia, and paralleled the PE to Duarte.  It was later tied into the PE line and the western part was abandoned; the Duarte end was cut back to Monrovia and served the Day & Night water heater plant.

Back around 1945, my parents took my brother and me into Los Angeles Union Station on the PE and we returned on #42.  We lived in Monrovia, but at Arcadia the PE and ATSF stations were less than a block apart.  #42 was usually powered by a high-wheeled 4-4-2  “Atlantic” type locomotive–couldn’t pull very many cars, but would get out of town in a hurry.  Typical train had a Railway Post Office car, an express car and an old coach for the few passengers who might want to ride.

Around 1949, steam gave way to diesel, and not long after that, the run was taken over by a self-contained motor car, sometimes called a “doodlebug” or “skunk car”.  Sometime in the mid-1950s, the train was discontinued as roads improved and trucks were more widely used to haul the mail.

Now we look forward to new trains serving my old home town, with more in an hour or two than Santa Fe ran all day.