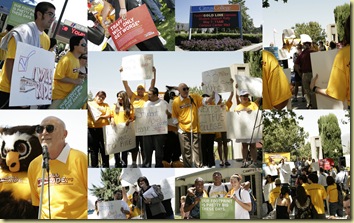 For those of you who missed our live-tweet of the rally, or just can’t stand live coverage in the form of 140 character text messages (learn to love it?), the best way to describe the event was: it went great!

With the “Brain Train” (explained below) rally starting on time at around 11 a.m., and with Mother Nature doing her best to remind us that a scorching summer is approaching, a very lively and enthusiastic crowd of yellow (gold!) shirts began to gather around the Citrus College campus center mall to begin another quest to convince Metro to fund the Gold Line Foothill Extension. The crowd that gathered was not limited to students but also various elected officials from the San Gabriel Valley, including Duarte Mayor and Metro Board Member John Fasana, and college administrators and professors from nearby colleges. While the crowd was a mixture of different backgrounds and professions, the rally gave way to a unifying message that was reflected by the various groups of speakers for the day.

Making the first appearance and speech on stage to rally the crowd up was Citrus College’s very own Fighting Owl mascot, who also deserves recognition for braving the near 100-degree temperature in a full owl costume for the entirety of the rally (that’s passion). The student speakers were represented by the presidents of various student bodies and campus clubs from Citrus College and Mt. Sierra College, and they reminded the crowd (and Metro) of the financial strain that a lack of alternative transportation puts on the students who are already facing rising gas prices and tuition. Each speaker told a personal story as they had made a case for building the extension ASAP. The elected officials who later took to the microphone included Azusa Mayor Pro Tem Uriel Macias and Glendora City Councilmember Doug Tessitor. They highlighted the economic benefits (thousands of jobs and billions of dollars) that the extension could bring to the San Gabriel Valley in the coming decades.

Citrus College President Dr. Geraldine Perri acknowledged a very serious problem that arises from relying on cars for transportation to work or school: even if you have your own reserved parking spot (as she does), somebody in desperate need of a place will take it (as she found out the morning of the rally). She said the time has come the build the Foothill Extension to ease the parking crunch at the region’s 12 colleges and universities. Reserved parking spot or not, supporters grumbled about the trouble they had finding parking at the Citrus campus, which is also one of the many reasons why they came out in support of the Foothill Extension in the first place.

Professor Glenn Dunki-Jacobs of Mt. Sierra College is probably tied with the Fighting Owl in terms of crowd-riling ability, but it is arguably fair to say that nobody beats the outspoken and energetic professor on his support for the Foothill Extension. Mindful of his own past as a student activist, he reminded the crowd of the responsibility that was placed upon them to make a difference as a unified voice in a growing San Gabriel Valley – and that they shouldn’t stand on the sidelines while others made decisions for them.

In the end, the rally kick-started a busy two-month period during which Metro is expected to determine when the Gold Line Foothill Extension will be funded. If Metro begins its funding commitment in 2010, the next phase of the Gold Line – from Pasadena to Citrus College – could be open in 2013.

Explaining the “Brain Train”: the rally was also known as the “Brain Train” rally because 12 colleges and universities – with more than 28,000 students and 3,500 faculty and staff – are located within a half-mile radius of the Gold Line Foothill Extension stations.

Crews are installing the falsework for the future light rail bridge over the Foothill Blvd./Grand Ave. intersection in Glendora. The falsework is the temporary support for the super-structure as it is built across the street. #TheJourneyContinues 🛤️