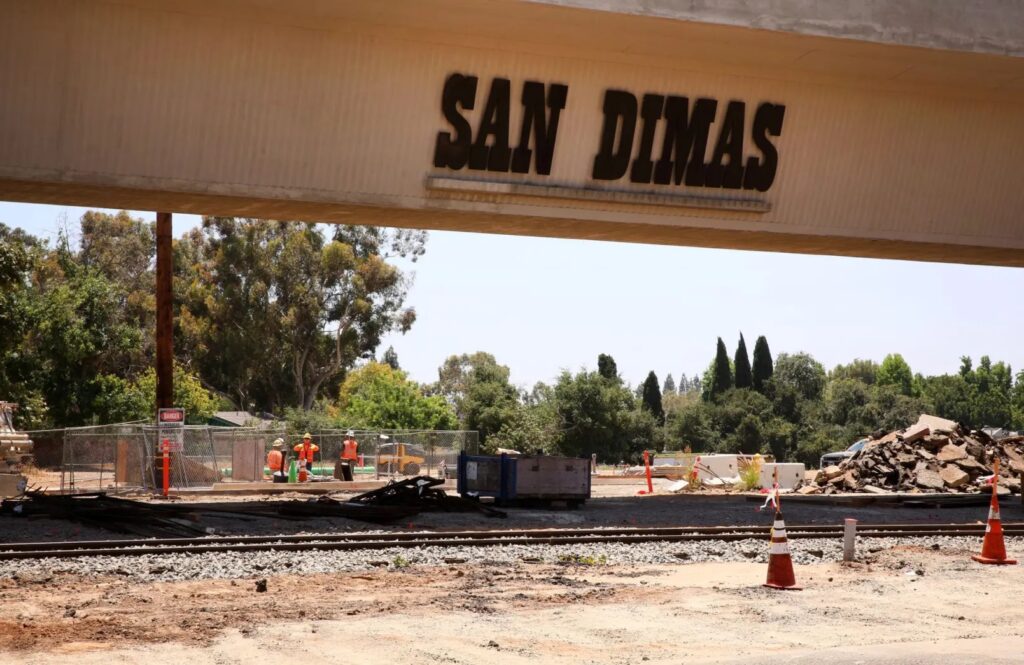 FILE – Construction continues at the San Dimas Gold Line (L-Line) overpass, seen here during an event celebrating 50 percent completion of the Gold Line light rail (L-Line) extension project in San Dimas on Friday, June 17, 2022. The project, which started in 2020 during the pandemic, extends the light-rail system into Glendora, La Verne, San Dimas and Pomona. But the city of San Dimas doesn’t like the environmental review done on a parking project and sued to stop the project in late August 2022. (Photo by Trevor Stamp, Contributing Photographer)

An environmental lawsuit filed by the city of San Dimas threatens to dramatically alter service on the 9.1-mile L Line (formerly Gold Line) foothill extension, setting up a strong possibility that the light-rail train will skip that city’s station if the litigation delays local construction.

In a surprise move, the city of San Dimas filed a lawsuit on Aug. 26, 2022 against the Metro Gold Line Foothill Extension Construction Authority, claiming an environmental review of a proposed parking area next to the future station was inadequate. The city is asking the court to halt construction.

… the city objected to a previous configuration using the San Dimas City Yard as a parking lot because it would cost more than $20 million to buy land for a new city yard. Instead, the city suggested using the existing Park & Ride lot to build the train station parking. The city and the Construction Authority agreed to the change.

“I can’t explain why they (city of San Dimas) have taken the position they have,” [Foothill Gold Line Chief Project Officer Chris Burner] said.

“We went through a lengthy and expensive process to do as they asked – including extensive environmental review. Now they have brought a lawsuit,” [Foothill Gold Line CEO Habib F. Balian] said in an emailed response.