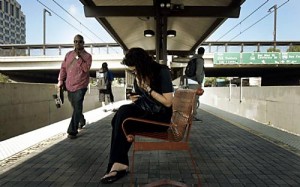 Gold Line riders at a glance

Average daily ridership (weekdays) on the Gold Line has steadily increased during the past five years, reaching a new high of more than 35,000 riders last month, according to Metro ridership figures:

Not surprisingly, that’s been the trend almost since the $859 million, 13.7-mile rail line from Pasadena to Union Station opened in July 2003: Each spike in gasoline prices since then has corresponded with jumps in the Gold Line’s average daily ridership.

For the first time, the Gold Line has consistently surpassed its original daily ridership projections of 26,000 to 32,000.

And it follows the gas/ridership correlation. In March, the average gallon price for self-serve regular passed $4 in Los Angeles County for the first time since June 2008, when it hit an all-time record of $4.63 a gallon.

It’s riders such as George Cabado, who was taking the Gold Line home recently from his job in Pasadena to Boyle Heights, who have helped boost ridership by opting to ditch their cars for the train, transit officials said.

“No comparison,” Cabado said, displaying the $1.50 fare he paid to board the line at the Lake Avenue Station. “In my van I was spending $20 a day.”

At the same time, Cabado said, work in his construction field has dwindled, leaving him with mass transit as his cheapest commuting option.

MTA officials believe Gold Line ridership numbers would be much higher if not for the county’s pervasive 12percent unemployment rates, spokesman Jose Ubaldo said. Ridership on Metro’s still-forming rail system tends to reflect the number of people out of work, he said.

A look at ridership on Metro’s other rail lines shows it fell last month compared to March 2010, and that includes the Red Line, one the most heavily used. It saw a drop from 155,463 in March 2010 to 144,093 last month. Green Line and Blue Line ridership also decreased last month, MTA figures showed.

Those lines traverse areas of high unemployment, at or above the county average of 12 percent, including downtown and South Los Angeles. Pasadena’s unemployment rate, meanwhile, stood at about 9 percent.

“It’s a different story now than in 2008,” when sticker shock at the pump sent drivers in droves to mass transit, Ubaldo said. “Now, people are more used to the higher gas prices, but with the recession, a lot of people are not working. There are fewer people now who need to take the bus or train to work.”

But the Gold Line differs from Metro’s other rail lines in ways that have helped shield it from the impacts of the recession. The median yearly income of Gold Line users, for example, is about $42,500, compared to $11,250 for Red and Blue line transit users, according to a 2004 study by researchers at UCLA.