The following article appeared in Curbed LA on March 12, 2015. 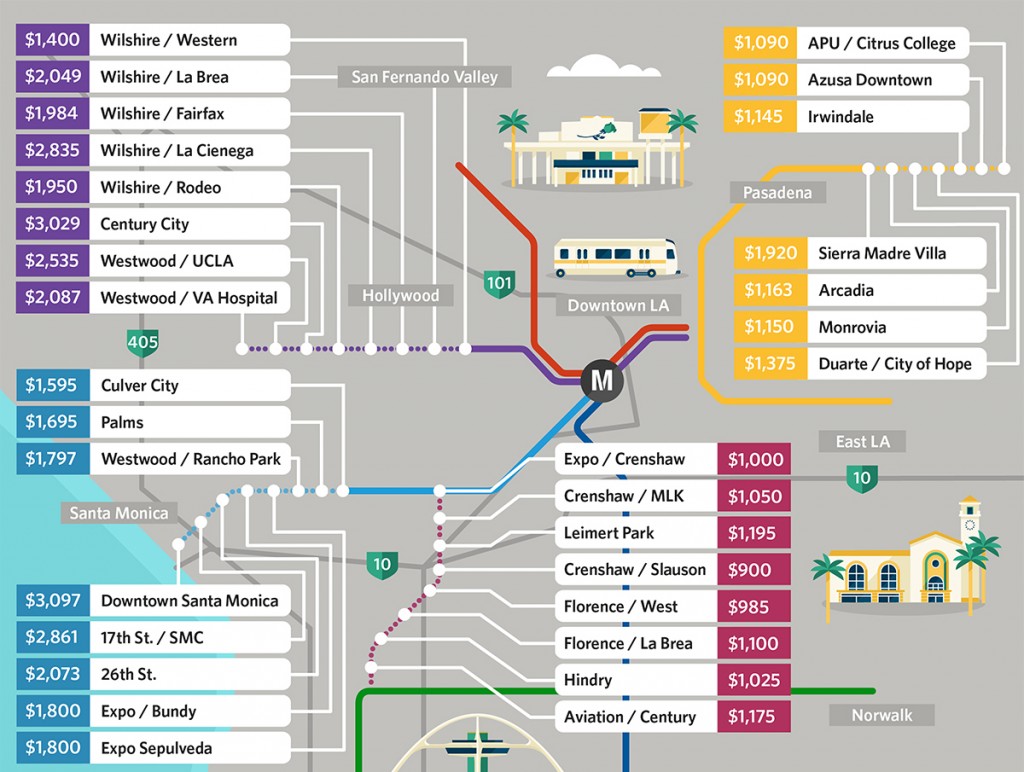 Los Angeles has several new rail lines opening in the next few years, and theExpo Line extension from Culver City to Santa Monica, the Crenshaw Line, and the Gold Line extension further into the San Gabriel Valley are all going to alter the way people get to work—but they’re also going to change the way people live and, specifically, how much rent people pay to live in the areas around them. Rental site Radpad cites a report from Boston that found that prices around new rail stations rise 25 percent, and in some cases as much as 67 percent. What’s a renter to do? Maybe start looking at relatively affordable ‘hoods that will be transit-accessible at some later date. With that in mind, Radpad mapped out average one-bedroom prices within a half-mile radius of LA’s future stops to give Angelenos a hint about where they might get some eventually-transit-friendly deals.

If rents rise 25 percent around already pricey downtown Santa Monica, they’ll be even further out of reach at a staggering $3,871. So SaMo continues to be unaffordable for many, nothing new there. But what about elsewhere along the Expo extension? The cheapest rent might be near the new Palms station; a 25-percent hike in rents would raise one-bedrooms within half a mile to about $2,120—still pretty high, but maybe you’ll save some money on gas? Further inland, one-bedrooms around the Leimert Park station on the Crenshaw Line are a reasonable $1,195 right now; with a 25-percent increase, they’d be just under $1,500.

To the east, the new Arcadia station, just beyond the present-day end-of-the-Gold-Line at Sierra Madre Villa, has a pretty affordable average one-bedroom rent of $1,163. A 25-percent hike would see that rise to just about $1,453. Not so bad for being *around a 40-minute train ride away from stations Downtown (and those are 40 minutes you can sleep). [Note from Construction Authority: the estimated travel time to take the Gold Line from Arcadia to Union Station is 33 minutes.]

Ray
Construction Update and Picture of the Week