The following article appeared in the San Gabriel Valley Tribune and Pasadena Star-News on August 29, 2015. 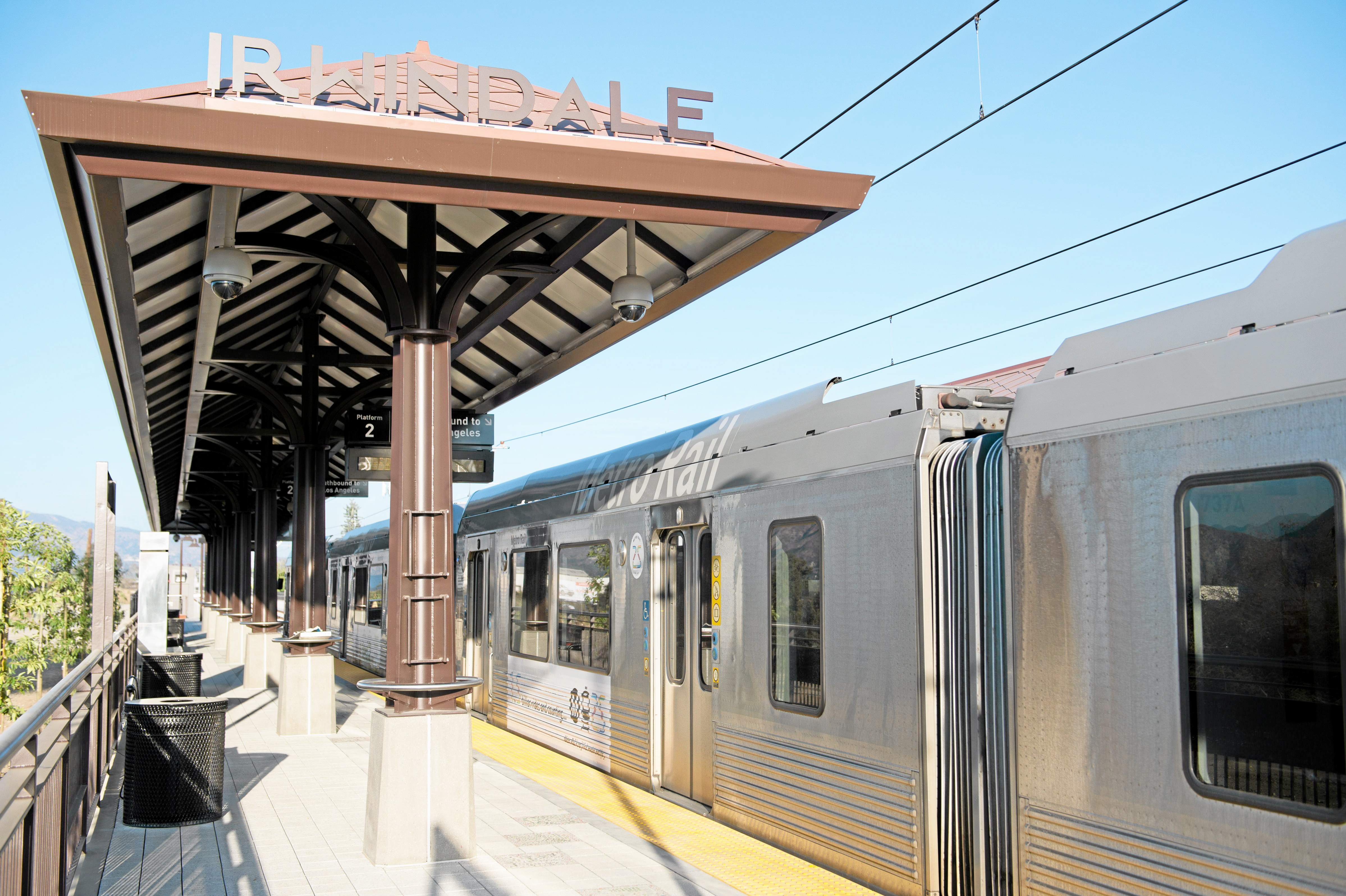 About 100 yards due west, the gigantic stainless-steel beer vats of the MillerCoors Brewing plant wavered in the triple-digit heat like a mirage.

Above, a concrete freeway cloverleaf routed cars onto the jammed 210 Freeway, while trucks rumbled overhead on Irwindale Avenue.

Just east sat the Irwindale train station. One of five new stops of the 11.5-mile Foothill Gold Line from Pasadena to the Azusa/Glendora border was christened Friday. No, no one used champagne. Nor beer – well, not quite.

When he heard the weather forecast for the late afternoon dedication, Glendale Mayor Ara Najarian, a director on the Los Angeles County Metropolitan Transportation Authority (Metro) which will operate the line beginning in the spring of 2016, said he would participate but was told the only thirst-quenching beverage served would be water.

• Video: A look at the new Irwindale light-rail station

“Don’t worry. I brought my own,” he said, hoisting a souvenir can of Miller’s iconic Lite Beer, drawing a chuckle from the sweltering dignitaries.

It’s anybody’s guess how many of the brewery’s 500 employees will ride the train, whose station is just steps away. One thing is clear, in a city of 1,400 people, the smallest city with a train station in all of Los Angeles County, the city’s business population would constitute the majority of boardings at this remote light-rail station located east of the San Gabriel River.

Aside from beer workers, the city is famous for its hot sauce, home to Huy Fong Foods, Inc., maker of Sriracha Hot Sauce. Bottles of the red condiment were given out for free at the dedication.

Beer and hot sauce workers, along with those who work the rock quarries that can be seen from the station as scars in the mountains, may indeed use the mass transit option, instead of driving on the gridlocked 210 Freeway.

It seems like this time, Irwindale got a fair deal. The station ­— a modest platform with canopies, decorative tiles and ticket machines, plus an adjoining 350-space parking garage ­— was paid for by county taxpayers from 2008’s Measure R.

Irwindale has not always been as successful.

In 1987, the Oakland Raiders promised to move to Irwindale and build a stadium in one of its giant gravel pits. But that never happened. Instead, owner Al Davis received a $10 million cash advance from the city and got to keep it when the deal fell through and he moved back to Oakland.

Known as the Raider Crater, it sits untouched a stone’s throw from the station on the other side of the 210 Freeway.

Meanwhile, Irwindale officials are still talking about filling those gravel pits and selling them for development. The so-called northern pits — including the 80-acre Raider Crater — were on City Councilman Manual Ortiz’s mind when he spoke to me about office and retail workers that will ride this train.

“We are planning future developments both to the north and the south,” he said. Plans to tear down the Irwindale Speedway and put up an outlet mall have also been announced.

The history of the Raider Crater wasn’t lost on Monica Lopez, 57, a member of the Padilla family, one of several families that helped settle the town, known as Jardin de la Roca (Garden of the Rock). She said this will be a positive for the residents and for those who work in the city.

Theresa Blue, also a Padilla family member, said she plans on taking her kids on the train to downtown Los Angeles and Pasadena.

“This will put Irwindale on the map,” she said.

For a city that was once down in the pits, things may be looking up.

As Najarian said at the close of his remarks, souvenir beer can in hand: “Cheers!”