Metro is considering a measure for the 2016 ballot that could raise $90 billion over 45 years for various projects. A bid to extend a similar tax failed two years ago. 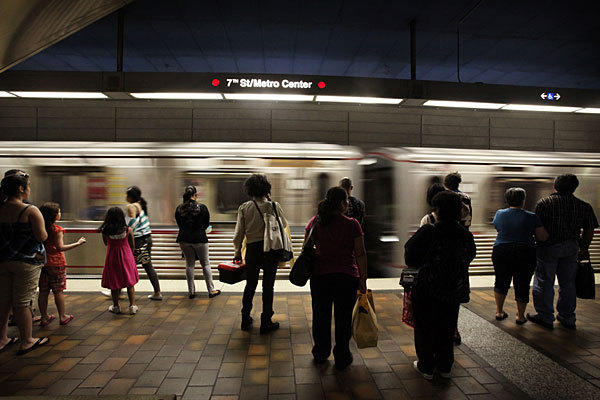 Hoping to garner voter and political support across Los Angeles County for a possible half-cent sales tax increase, transportation advocates gathered downtown Friday to unveil a proposal for a 2016 ballot measure that could fund a range of new transit projects, including a toll highway and rail line through the Sepulveda Pass.

The tax proposal, announced by the advocacy group Move L.A., could raise an estimated $90 billion over 45 years and cost the average resident 25 cents to 30 cents a day, proponents said. It would also boost the countywide sales tax to 91/2 cents on each $1 spent — though shoppers in cities with their own sales tax would pay higher rates.

Responding to critics who complained that the city of Los Angeles received the lion’s share of transit projects from the half-cent sales tax increase approved by voters six years ago, elected officials — including Los Angeles Mayor Eric Garcetti — emphasized that revenue from the new tax proposal would benefit all areas of the county.

“It will not simply be Mother Metro saying, ‘This is what you get,’ ” Metro Board of Directors Chairwoman Diane DuBois, a councilwoman from Lakewood, told conference attendees.

Metro has not yet decided to put a measure on the ballot. But with as much as $27 billion in added tax money to spend on rail projects, advocates said, the agency could build a light-rail link to Burbank’s Bob Hope Airport, convert the San Fernando Valley Orange Line busway to rail and extend the Green Line near LAX to sweep through South Bay cities and connect with the Blue Line in Long Beach.

The tax increase would need a super-majority of 67% to pass. Metro’s preliminary polling says that 58% of residents would support a tax increase.

Any tax increase that goes on the ballot must appeal to voters in Beverly Hills, the San Gabriel Valley and South Los Angeles, county Supervisor Mark Ridley-Thomas said. The proposal “has to be regional, it has to be rational, it has to equitable — all three, all the time, all day long,” he told conference attendees. “If we neglect any one of those three elements, it will put the very proposition at risk.”

Guaranteeing projects across the county may be a political necessity, but it doesn’t always serve passengers the best, said Lisa Schweitzer, a USC professor who studies transit funding. She said transit-using communities with the potential for highest ridership, a common measure of success, tend to be clustered in the core of the county.

Two years ago, a proposed extension of the county transit sales tax approved in 2008 fell 0.6% shy of garnering the required two-thirds supermajority of votes. The loss came as a result of weak support in suburban, relatively well-off communities of the South Bay and the Westside, a Times analysis found. The analysis found support for the sales tax had eroded significantly from four years earlier, when voters initially approved the half-cent sales tax increase for transit.

“In order to get those areas interested in transit, you have to gold-plate it and sugarcoat it” with high-profile projects such as the Westside subway extension, which appeal to residents who typically drive their own cars, Schweitzer said. “But you can’t win without them.”

A half-cent sales tax increase being weighed for Los Angeles for the November ballot could endanger a countywide measure being studied for 2016, some transit activists say. 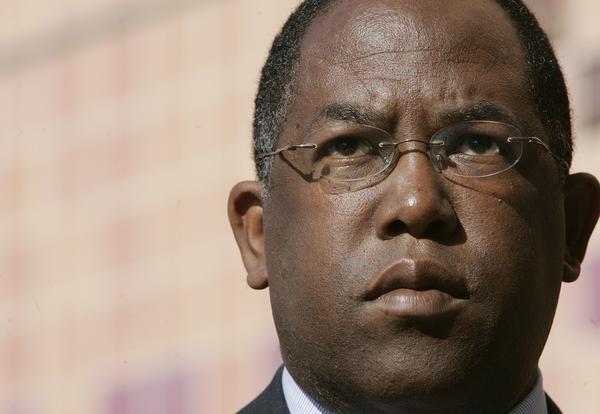 Supervisor Mark Ridley-Thomas said: "If you're trying to ask the question, where do you get the biggest bang for your buck, then the argument swings pretty forcefully toward" a higher countywide transit tax. (Spencer Weiner, Los Angeles Times / November 5, 2008)

A plan for increasing the sales tax to fix Los Angeles’ broken streets is on a collision course with a similar levy being pushed for regional transit projects.

Two weeks ago, the top budget advisor to the Los Angeles City Council said a tax increase is the only way thousands of miles of severely damaged roads and sidewalks will get repaired. A half-cent increase in the sales tax, which would generate $4.5 billion over 15 years, should appear on the November ballot, City Administrative Officer Miguel Santana said. The proposal will get its first public hearing Wednesday.

But public transit advocates are voicing worries that a city tax increase could jeopardize their proposal for a countywide sales tax increase for transportation projects, one that would go before voters in two years.

The back-to-back measures may undermine support for a second tax increase, said Denny Zane, whose organization Move L.A. is promoting the transit tax concept. “When you need a two-thirds vote,” to pass a transportation measure, “you don’t really start out with any margin for error,” he said.

If voters approve the street repair measure in November, the tax rate within Los Angeles’ city limits would jump to 9.5 cents on every $1 of retail sales. Passage of a countywide transit measure, which could raise $90 billion over 45 years, could send the city’s rate as high as 10 cents.

Los Angeles is one of 88 cities in the county but has roughly 40% of the county’s population, making it a crucial part of the electorate in deciding any regional transportation tax.

Zane’s organization held a daylong conference last week on the proposed transit tax, which could not reach the ballot without a vote from the 13-member Metro board. Dozens of speakers outlined the types of projects that could be built, including rail extensions to airports in Los Angeles and Burbank; light rail stretching across the South Bay; and a transit tunnel through the Sepulveda Pass.

Bob Waggoner, a construction union leader who took part in the conference, said winning approval of a countywide transportation tax should take political precedence over a city measure.

“What’s certain is that if the city of Los Angeles passes a street measure in November, then there is going to be a problem passing another measure in 2016,” said Waggoner, political director of the International Union of Operating Engineers. If the proposed city tax is defeated, it still could create problems, he said. “We come back two years later and [voters say] ‘Here we go again, another tax.’ And there’s another chance of it being voted down.”

“If you’re trying to ask the question, where do you get the biggest bang for your buck, then the argument swings pretty forcefully toward” a higher countywide transit tax, he said.

Garcetti has collected polling data on voters’ support for the proposal, but his spokesman, Jeff Millman, declined to release the results. He also declined to say where the mayor stands on the possible tax increases. “We’re reviewing the proposals,” he said.

The Green Way: ‘We are part of one city called L.A.’ — Eric Garcetti – San Gabriel Valley Tribune
Construction Update and Picture of the Week