The following article appeared in the San Gabriel Valley Tribune on July 8, 2015. 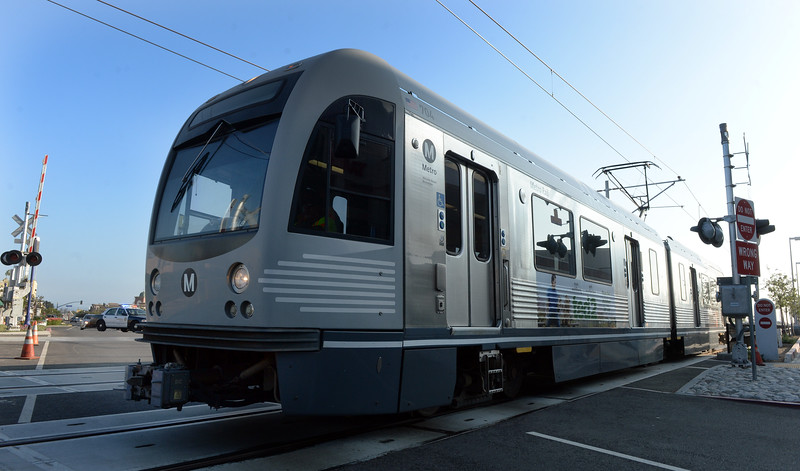 Two light-rail lines — one on the east side of Los Angeles County and the other on the west — have begun final testing, the penultimate step before connecting residents from far-flung parts of the county for the first time since the days of the Pacific Electric Red Car.

If test drives prove successful, electric rail cars along the base of the San Gabriel Mountains and the streets of Santa Monica will carry passengers the farthest east and west since the last Red Car train ride in 1961. That moment — predicted for March 2016 — would allow two key rail lines in car-centric Southern California to open simultaneously, a quirky, record-book first.

“It really opens much more of the county to folks, without having to be in their cars,” said Lisa Levy Buch, spokeswoman for the Metro Gold Line Foothill Extension Construction Authority.

Although they are separate projects, the breaking down of L.A.’s freeway architecture would be an added bonus, say transportation planners. For example, riders from bedroom communities in the east San Gabriel Valley could stroll the Santa Monica Pier or shop the Third Street Promenade and return the same day without facing freeway and parking nightmares. While passengers would still have to change trains at 7th Avenue and at Union Station, those inconveniences will be eliminated when a third project, the $1.5 billion Regional Connector, is completed in 2020, creating a quicker, transfer-free ride.

Testing of trains began in April and continues until sometime in the fall, when the line will be turned over to the Los Angeles County Metropolitan Transportation Authority for pre-revenue testing/training of operators, said Gabriela Collins, government and community relations manager.

The first phase opened in 2012 and ran from the underground 7th and Metro Station in downtown L.A. to USC and Culver City, about 8.6 miles. When the second phase operates in early 2016, a trip from downtown Santa Monica to downtown L.A. will take about 46 minutes.

Ridership reached 31,000 boardings per day shortly after the first phase opened, Collins said. When completed, ridership is forecasted to more than double to 64,000 by 2030. “We certainly expect that to be exceeded,” Collins said.

Now, commuters can avoid the crowded 10 Freeway and ride the train to USC and the Hollywood studios in Culver City. Final testing on the Santa Monica portion runs through August.

“Santa Monica is a destination. It is certainly a place that has a lot of jobs. There are huge tech employers out there,” Collins said, such as Google and Activision Blizzard, a large video game developer, Collins said.

The Gold Line construction group received the first of 15 new rail cars on Wednesday from Kinkisharyo International’s Palmdale facility, Buch said. The Authority will finish construction by the third week in September. Metro has said it may begin operations in March.

“We started (night) testing in Azusa last week,” Buch said Tuesday. “They are testing communications between the equipment and the train. We’re doing the final touches,” she said.

Residents may see trains on the tracks at night but the operators won’t use crossing bells and only “quiet-zone” buzzers, not horns.

The Pasadena-to-Azusa extension will add 13,600 daily boardings, Buch said. Key ridership will come from employees at City of Hope and students attending Citrus College and Azusa Pacific University, she said.

“The transit option will make a huge difference in how quickly we see those businesses come here and grow here,” she said.

More twenty and thirty-something tech employees from the eastern edge of the county and even the Inland Empire will ride the train to new tech start-ups in Pasadena, Kurtz predicted.

“The Gold Line (extension) will allow employees to live in different places. Plus, we all know things start in Pasadena, then when companies need more space, move to Monrovia and then when they go into production they go to Irwindale. And the Gold Line connects all of those.”

Planners predict expanded non-driving options will attract more light-rail riders to and from workplaces at both ends of the sprawling county. Having both lines open at the same time unintentionally underscored Metro rail’s attempts to keep pace with a growing economy and an expanding population base.

“I don’t know if they (Metro) ever had two lines opening so close together,” Collins said.