Just like that – the region took a quantum leap forward on Saturday in realizing their Gold Line Foothill Extension light-rail-riding dreams. More than 700 residents, elected officials, transportation officials, rail aficionados, and swarms of news media came out to Newcastle Park in Arcadia on Saturday to celebrate what has been (not to be cliche) quite the journey over the last decade. 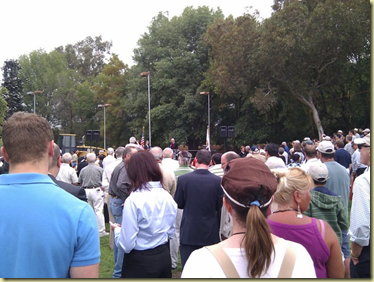 The master of ceremonies was none other than KNX Radio’s Frank Mottek, whose voice works as well in person as it does on radio. He led the introductions to many of our elected officials who fought tooth and nail in the past on the legislative level to make the Gold Line Foothill Extension a reality: Congress members Judy Chu, Adam Schiff, David Dreier, and Grace Napolitano; California Senator Carol Liu and Assembly members Mike Eng, Dr. Ed Hernandez, Anthony Portantino; Supervisor Michael Antonovich; local Council members and Construction Authority Board members John Fasana, Ed Reyes, Doug Tessitor, Keith Hanks, Sam Pedroza (who gave a shout out to I Will Ride – thanks!); and Metro Board Chair and Glendale Mayor Ara Najarian. 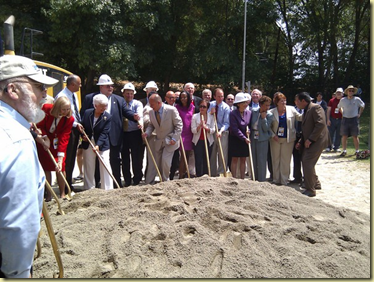 Some took the time to reflect on the hard-fought battles over funding, while others talked about the team work it took to get to the groundbreaking. Many took the time to give thanks to  Authority CEO Habib Balian – whom they credited for having fought tirelessly in every way imaginable for the project over the years. The biggest thanks to Habib might have come from Metro Board Chairman Ara Najarian, an instrumental figure throughout last year’s fight for funding, who thanked Habib for making the groundbreaking happen just days before his chairmanship comes to an end. 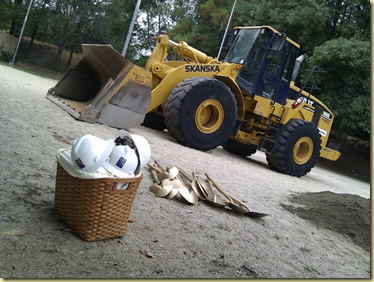 At around 11:30 AM, the elected officials grabbed their hard hats and gold plated shovels and officially broke ground on the Foothill Extension. Just like that – a new beginning for the region. A new beginning that’s set to bring more options to driving for millions of San Gabriel Valley residents and workers, cleaner air, a billion dollars in economic development, and thousands of much-needed jobs. One more high five for the San Gabriel Valley! 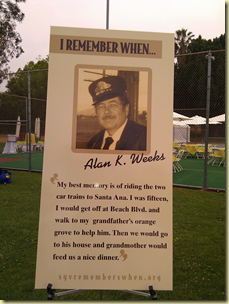 A particular booth stood out on Saturday and that was the one hosted by the Mt. Sierra College Business Club (that’s right… the college that was instrumental in starting this movement a few years ago). This group of students recently teamed up with the Authority on a project to ask San Gabriel Valley residents about their memories of transportation in the Valley over the years. The project kicked off officially at Saturday’s groundbreaking, so I encourage you to share your stories and photos. And please encourage others you know to do the same. Visit: www.sgvrememberswhen.org.