If you’re a resident along the Foothill Extension corridor, 2009 was the year of the Gold Line. As you recall, voters ended 2008 with overwhelming support for Measure R and 2009 began with the communities throughout the County celebrating that victory and working together to plan for our united future. Many thanks here go out to the San Gabriel Valley voters who pitched in the votes needed to pass the required two-thirds mark for Measure R, allocating a minimum of $735 million for the Foothill Extension.

Here we look at the highlights of 2009, which culminated in securing $851 million for the project, and plans to break ground in June 2010!

Revival of the I Will Ride Movement 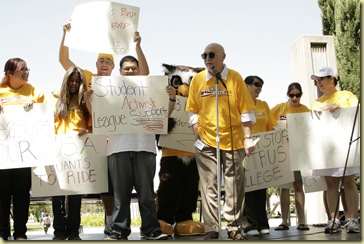 Don’t call it a comeback. We’ve been here for years.

I Will Ride was formed in 2008 under the direction of students from colleges across the San Gabriel Valley, and in the beginning of this year it was handed over to the Gold Line Foothill Extension Construction Authority to continue their work. Hence, this blog. The unmistakable gold shirts started spreading its way throughout the San Gabriel Valley once again – onto college campuses, community events, and large business centers. Then we had a rally. Then we started showing up to the Metro Board meetings. Somewhere along the way, Bob Davis started an unofficial groundbreaking at the Gold Line’s Arcadia tracks. We showed up to a few more Metro Board meetings.

All eyes were on Art Leahy as he took over as the new boss at Metro in April of this year. While his rise to the top made quite the story for many newspapers (former bus driver, from family of transit operators, fulfills destiny by returning home to run Metro), the San Gabriel Valley looked on with cautious optimism that he could smooth out the regional bickering that had gone on for too long. Meanwhile, in the middle of the intense Long Range Transportation Plan (LRTP) debates, we saw Ara Najarian take the Chairman post on the Metro Board.

What was evident was that Art Leahy and Ara Najarian seemed intent on changing the tone of the agency and Board as they hammered out arguably the most important transportation plan for our county’s future. Only a month after starting his job as CEO of Metro, Art attended and spoke at the San Gabriel Valley’s Measure R and Economic Recovery Forum, where he laid out the importance and priority of the Foothill Extension for his agency. Metro “was duty bound, honor bound, to do the project,” said Art to the San Gabriel Valley legislative leaders and community members. He had also acknowledged the rift that existed between regions across Los Angeles County and pledged to the audience that he would build a consensus when working on the LRTP.

In a testament to Ara Najarian’s own efforts to build a consensus among the regions, it should be pointed out that he came in as Chairman of the Metro Board at a time when residents were losing patience and the Board had enough votes to pass the LRTP. Rather than hurrying up and ending it all with a simple majority vote, he decided to delay the approval of the long range plan until he could secure unanimous approval from the entire Board of Directors. In several public appearances in the San Gabriel Valley, he has not been shy to state his support for the Foothill Extension and his desire to see the project break ground while he is Chairman of the Metro Board.

Fast forward to today and we’re seeing the fruits of Mr. Leahy and Mr. Najarian’s labor. The LRTP passed with unanimous approval by the 13-member Metro Board of Directors in October – securing the funding ($851 million) for the Foothill Extension and commitment from Metro to find other sources of funds to finish the line to Claremont. The Board also unanimously committed to operate the next two segments (Pasadena to Azusa and Glendora to Montclair) when construction is completed. This was a huge victory for the project, the San Gabriel Valley voters and I Will Ride supporters.

Show me another area in Los Angeles County with transit architecture that doesn’t resemble your old plain structures – that’s right, you can’t. 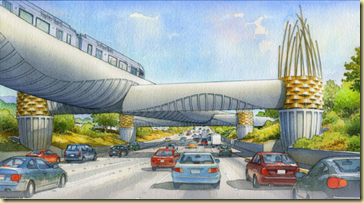 Below are two designs that, for many obvious reasons, didn’t make the final cut. Guess which one I would have picked. (Hint: the one on the right)

The future wasn’t looking so bright for our county when Metro staff presented a federal transit funding map that painted a very bleak funding picture for our region in comparison to much smaller and less populous cities across the country. If you’re a Los Angeles County resident, it’s probably safe to say you were up in arms over the thought of cities with 1/10th our county’s population receiving ten times more funds from the federal government. In response, Metro staff picked the Subway to the Sea and Regional Connector as the projects they would apply for to receive federal money in as little as three years. Then came the mother of all responses.

Fourteen Congress members signed and sent a letter to the Metro Board of Directors – urging them to consider a different federal funding strategy than the one they had just approved. Their reasoning? A more inclusive strategy that includes shovel-ready projects like the Foothill Extension would make it more likely that our county doesn’t get left behind with a huge gap in federal funding in future years. The letter hit home for many on the Metro Board, who unanimously revised staff’s recommendation to make other projects – such as the Foothill Extension – priorities for the agency to seek federal funds.

2009 Ends with State of the Project Workshops

Two weeks ago, more than 150 guests – including Congress members Judy Chu, Adam Schiff, and David Dreier, and state and local legislators – came out to Glendora to celebrate a job well done on the effort to get funding for the extension and to hear Authority staff give status updates on their progress. Those present were also able to attend workshops on the iconic freeway structure design and the success of the art used on the Union Station to Pasadena phase of the Gold Line.

The lunch portion was highlighted by keynote speeches from our Congressional representatives and, while it was a reflection on past successes, it was a reminder of the job that still lies ahead – starting with the effort to get that groundbreaking going in June 2010. Speaking of the word job, our federal elected officials emphasized that, with construction jobs at an all-time low in our county and a still-hurting economy, the groundbreaking represents an opportunity to get people working again. Let’s all hope this opportunity becomes a much-need reality by the middle of next year. And to keep a positive tone going forward, Congressman Adam Schiff gave a few words to the crowd. Adam Schiff, who championed the original Gold Line as a State Senator back then, put on his best inspirational speaker hat and told the audience that, in their current battle for the Foothill Extension, if they ever got discouraged, they should look at the past struggles of the first Gold Line and how it eventually became a success.

And about that schedule. The Authority has a roadmap to get the Foothill Extension to Azusa up and running by 2013. All this begins with the much anticipated groundbreaking in June. A few meetings with Metro in January will determine the feasibility of this schedule, so here’s to hoping for some more positive news.

Call of Duty Award: Citrus College Owl mascot – for braving over 100-plus-degree weather in an owl suit (in the sun) for the sake of rallying supporters at the Citrus College rally. Show me a more brave mascot and I’ll show you a phony.

Tony Robbins Award: San Gabriel Valley resident Bob Davis – for taking initiative and starting his own groundbreaking a year before the proposed official groundbreaking. You will not find a bigger supporter of the Foothill Extension. Thank you Bob.

Parallel Universe with Office Supply Shortage Award: City of Hope employees – for going through 25 boxes of Foothill Extension supporter pens in a span of 3 hours when we showed up at the Fall Benefits Fair at the City of Hope campus. We normally have a hard time giving away one pen at most I Will Ride booths.

“My goal and my priority, is to help the Authority get the funding it needs to get the Gold Line through to Claremont and also to Montclair" -Foothill Gold Line Board Chair Ed Reece @edgarreece

Crews have begun constructing the foundations for the west abutment of the future light rail bridge over the Foothill Blvd./Grand Ave. intersection in @CityofGlendora. #TheJourneyContinues 🛤

Crews have started constructing the falsework for the future light rail bridge over the Bonita Ave./Cataract Ave. intersection in San Dimas. The falsework is the temporary support for the super-structure as it is built across the intersection. #TheJourneyContinues 🛤

Crews recently removed the forms for the east abutment of the future light rail bridge over Lone Hill Ave. in Glendora, revealing the citrus design patterns.