This story appears in the May 26, 2012 edition of the Pasadena Sun. 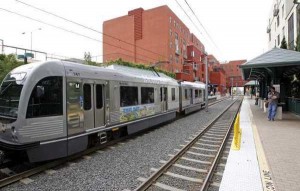 A train stops for riders at the Del Mar Gold Line station in Pasadenda. The Metro line has attracted young residents to the downtown area. (Roger Wilson / Staff Photographer / May 25, 2012)

A Gold Line stop is right below his Pasadena studio. Shopping and restaurants in Old Pasadena are a minute or two away.

“For a lot of younger people it’s in vogue to not have to get in your car,” Graves, 26, said. “I can walk down the street for groceries, and there’s a gym inside my building.”

Graves is part of a young set of residents that started moving into Pasadena’s downtown area in recent years, and in recent months has begun to flex some political muscle.

Earlier this month, the Downtown Pasadena Neighborhood Assn. pushed the City Council to redraw the city’s political boundaries and create a downtown council district. Four council members currently have a piece of the area.

The council voted against the plan, but not before Mayor Bill Bogaard and Councilwoman Margaret McAustin went out of their way to applaud the civic engagement of the residents and encourage them to stay active.

Meanwhile, Pasadena officials are looking into two other requests by the association: Using the city’s transportation improvement fee to make pedestrian- and bike-friendly upgrades to downtown streets and using residential impact fees paid by developers to create parks in the central district.

Jonathan Edewards, president of the association, said his group has 60 members and is growing. Their goals of increasing green space, bike paths and mass transit options align with those of downtown businesses, as the access to amenities is what makes the neighborhood work.

“There’s a big connection between how close businesses are and the quality of our lives,” Edewards said. “We’re not typically walking into each other’s homes, but we’re walking to businesses.”

Paul Little, president and chief executive of the Pasadena Chamber of Commerce, said the central district residents are attractive to businesses because of their spending power.

“They’re relatively affluent, working, young people who are on their own and also willing to be involved in civic life,” Little said.

The downtown neighborhood sprung to life as a result of the 1994 General Plan, which called for high-density housing near public transit, said Eric Duyshart, economic development manager for Pasadena.

“There was a significant shift and development pattern after 1994,” Duyshart said.

The residential feel of the area solidified after the Gold Line went into service in 2003.

Many people moving downtown have dual incomes, are young and childless. The average income of downtown residents is about $64,000, and 27% of them are 25 to 34 years old, according to Census Bureau data.

“This makes the residents of our downtown a little bit different than the rest of the community,” Duyshart said.

The city is updating its General Plan, as it does every 10 years, and it appears the plan will continue to call for residential development downtown, Duyshart said.

Little said the rise of residential downtown Pasadena has provided a jolt of energy.

“For a lot of people, what has evolved in downtown Pasadena has been very positive, and they would like to see it continue,” he said.