The following blog post originally appeared on The Source on January 18, 2013.

Beginning Sunday, January 27, Metro will operate more frequent service along the Metro Gold Line, improving train service from every 12 minutes to every 6 minutes on Saturday and Sundays from approximately 10 a.m. to 8 p.m.

New timetables are now available on board trains. Plan your weekend on the Metro Gold Line by using Metro’s Trip Planner.

This isn’t hugely surprising, given the surge in ridership on the Gold Line in the past two years — which was helped by increasing the frequency of trains during weekday peak hours in June 2011. 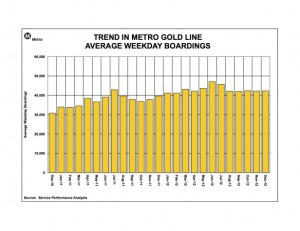