(to read the full letter, click on the image below) 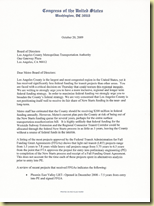 If Metro was looking for delegates to help them get that federal New Starts funding for the Subway to the Sea and Regional Connector (their priority projects), they should probably look a lot harder – because the majority of the current crop of our county’s Congressional representatives aren’t too happy with some of the Board’s recent decisions.

Yesterday, ten members of Congress from Los Angeles County (out of 18 total) and four members from nearby counties signed a letter that criticized the Metro Board of Directors for pursuing a federal funding strategy that only included the Subway to the Sea and Regional Connector. Using their insight on federal matters, they highlighted that “it is highly unlikely that federal funding for the Westside Subway Extension and the Regional Connector Transit Corridor could be allocated through the federal New Starts process in as little as 3 years, leaving the County without a source of federal funds in the interim.”

If all of this is sounding somewhat familiar, it is because this issue was brought up by Congresswoman Judy Chu’s office at last month’s Metro Board meeting – and repeatedly by us since then. And in case the Metro Board were not convinced enough that these fourteen members of Congress knew what they were talking about, they also presented a list of recent transit projects around the country that had received federal funding – most of which waited well beyond the 3 years that Metro staff had projected for the Subway and Regional Connector.

Let us remind you that this letter never went into the merits of the Subway and Regional Connector, because they are much needed projects – when included as part of a true regional plan. But Metro’s federal strategy currently stands, as stated in the letter, to further exacerbate the “regional inequity” (in comparison to other cities across the country) that Los Angeles County is all too familiar with when seeking assistance from Washington.

So Congress Members Come Up with Plan That Would Actually Work

Seeing the need to save Los Angeles County from a potential tremendous loss of federal money if Metro were to go ahead with their current plan, the Congressional group came up with a strategy that would not leave our region behind (again) when it came to securing federal dollars – all the while highlighting a particular project that could lead that charge:

The Metro Board’s determination to finally pass the 2009 Long Range Transportation Plan usually means the current draft of the plan is probably what we will see become the finalized plan – but don’t tell that to County Supervisor Michael Antonovich and Duarte Councilman John Fasana.

With the current draft of the plan still looking at a 2017 operating date for the first extension to Azusa, Antonovich and Fasana – both Metro Board members – plan on introducing a motion at Thursday’s meeting in an attempt to get Metro to commit to operating the line in 2013.

How the Metro Board of Directors act in response to the majority of their Congressional representatives’ criticism remains to be seen. And we really mean it remains to be seen. The same can be said for Antonovich and Fasana’s noble attempt to introduce just one small change that would make the San Gabriel Valley breathe a little easier. Here’s hoping.

The Metro Board meeting takes place tomorrow, Thursday, October 22, at 9:30 AM at the Metro building. We’ll be there to cover the big meeting on Twitter @iwillride.