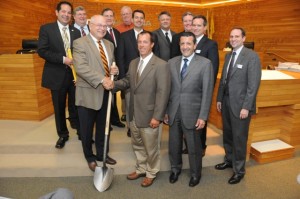 ARCADIA, CA – Today, the Metro Gold Line Foothill Extension Construction Authority Board of Directors awarded a $485.9 million contract to “Foothill Transit Constructors – A Kiewit Parsons Joint Venture” to design and construct the Metro Gold Line Foothill Extension from Pasadena to Azusa.  The project includes final design and construction of 11.5 miles of track, six stations, dozens of crossings, utilities, systems and much, much more. The project will take approximately four years to complete and is estimated to create nearly 7,000 jobs and $1 billion of economic output during construction (according to Christine Cooper, Director of LAEDC’s Economic and Policy Analysis Group).

“This team presented the best of both worlds; the top ranked technical proposal and the lowest bid” said Construction Authority Board Chairman and Glendora Mayor Doug Tessitor. “I am happy with the outcome and the selected team, and applaud the significant effort staff at the Authority put into conducting this procurement. Ultimately, we had three excellent teams vying for this important project, and the best team won.”

Kiewit and Parsons have teamed up nearly 20 times in the last decade to complete design-build projects and have designed and built more than 60 major infrastructure projects in the last forty years. Both are award-winning companies, providing world-renowned experience in successful completion of light rail transit projects.

Kiewit was the lead team member on Phase 1 of the Gold Line from Los Angeles to Pasadena (with Parsons as the lead design subcontractor), which was completed in 2003 on time and under budget. Kiewit also recently oversaw demolition of the Mulholland Bridge (part of the I-405 Sepulveda Pass Improvement Project). Coined by the media as “Carmageddon” for its potential impacts to Los Angeles’ heavily congested traffic corridor, the demolition was completed by Kiewit Pacific 17 hours ahead of schedule.

“Kiewit and Parsons both enjoy a long-time relationship with the Construction Authority, having both worked with the agency since 1999 when we began design on Phase 1. It is an honor to be chosen to continue that work 12 more miles east and to have a chance to work again with the hard working and dedicated team at the Construction Authority” said Bill Westland, Vice President & Area Manager, Kiewit Infrastructure West Co.

This contract award keeps the first Measure R rail project to go to construction on schedule for a 2015 delivery.