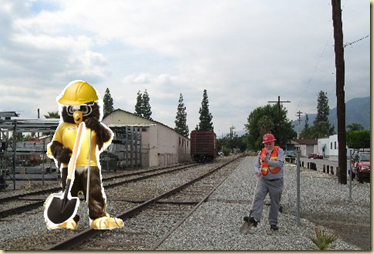 The Citrus College owl and Bob Davis knew this day was coming.

UPDATE: CHANGE IN GROUNDBREAKING DATE – to better accommodate the schedules of many San Gabriel Valley residents, the Authority has moved the groundbreaking to June 26, 2010 (previously on June 19). So save this date. Remember it. Leave post-it notes everywhere, as far as the eye can see. Write it on both palms on your hands. If you’re that forgetful, maybe key it onto the side of your car.

It’s going to be that big.

In what has been the biggest day for the San Gabriel Valley since the Long Range Transportation Plan was approved last October, the Metro Board of Directors unanimously voted yesterday to approve the funding and master cooperative agreements that would officially allow the Authority to move forward with the groundbreaking and construction of the Gold Line Foothill Extension this June. The effort to officially become the first Measure R light rail project to break ground may have seemed like an eternity for some folks, but the Gold Line Foothill Extension Construction Authority had been working with Metro staff through countless meetings in the past three months to hammer out these agreements. Great job to both sides.

The funding agreement sets in stone (or paper) the transfer of nearly $700 million from Metro (via Measure R tax revenue) to the Authority over a 10 year period towards the construction of Phase 2A (Pasadena to Azusa), and provides for an additional $110 million to be used in later years for Phase 2B (Azusa to Montclair). The master cooperative agreement basically sets the oversight rules between Metro and the Authority – since it is Metro that will be running the line after the Authority completes construction.

While there was a little bit of a tug of war between the two bodies to find the right level of review and approval over every aspect of the design and construction of the Extension, both sides were able to come to an agreement in the end that satisfied the needs of both agencies. Another significant aspect of this agreement is that, in addition to being applied to the Foothill Extension, it will serve as a framework for similar agreements in future transit projects throughout Los Angeles County.

Enough of this dry jibberish. What does this really mean?

The timely approval of these two agreements means that the Authority’s construction schedule… will be on schedule. There are currently six teams vying to win the design-build contract to begin construction of the Iconic Freeway Structure this summer, and four more teams turned in Statements of Qualifications earlier this week, looking to be pre-qualified to design, build and finance the Phase 2A Alignment work.

This also means that: