If you had followed us over the last six months, we had taken time to talk about the ongoing process to select contractors to build out the first phase of the Foothill Extension. For the procurement process aficionados out there (aka people who like to see firms bid against each other for a services contract), things are getting very real as the Gold Line Foothill Extension Construction Authority Board of Directors is 1.) set to award the winning firm with the contract to build out the Iconic Freeway Structure in early-June and 2.) have already narrowed the list of world-class teams to build out the Phase 2A Alignment down to three: Kiewit Pacific Co/Parsons Transportation Group, Shimmick Construction Company/URS Corporation, and Skanska USA Civil West District/Balfour Beatty USA.

A neat little factoid: the winning firms will be partnering with the Construction Authority to help finance the project through a P3 (aka Public-Private Partnership). These firms are preparing to invest their own resources – yes, money – in addition to their talented design and construction team resources to make the project a reality. This financing plan allows the Foothill Extension to be built much faster (four years in this case) – instead following a schedule based on needing to wait for all of the (Measure R) tax-payer money to be in the bank ahead of construction (the typical financing route for large-scale public improvement projects).

This is similar to the plan being proposed to President Obama and the U.S. Senate by Mayor Villaraigosa called “30/10.”  In that case, Mayor Villaraigosa aims to finance all of the Measure R transit projects by way of a $40 billion loan from the federal government. According to the Mayor’s plan, the transit projects would be built in 10 years (rather than 30) and the Feds would be paid back as Measure R revenue comes in. That P3 is Public-Public Partnership.

And all of this is happening just in time for the historic groundbreaking ceremony taking place on June 26 at Newcastle Park in Arcadia (note to everyone: BE THERE. AT 10 AM). 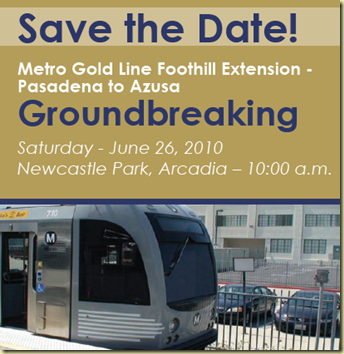