The following excerpt appeared in the San Gabriel Valley Tribune on November 20, 2017. To read the full article, click here. 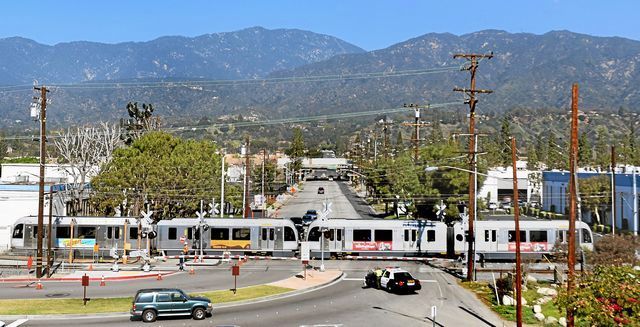 Foothill Gold Line train passes through Highland Avenue intersectionnear the Duarte Station Monday, February 9, 2015. Train testing has begun on the 11.5-mile Foothill Gold Line between Pasadena and Azusa, from Monday, through Summer 2015. Train testing is currently taking place in the cities of Duarte and Irwindale, and will expand to Pasadena, Arcadia, Monrovia and Azusa over the next several months.Systems integration testing is when the train is moving and they’re looking to see how it works together. Train will be running between Myrtle Avenue and Irwindale, back and at 15 mph.T(Photo by Walt Mancini/Pasadena Star-News)

Construction of the 12.3-mile Glendora-to-Montclair extension of the Gold Line will be expensive, costing about $1.5 billion in public funds, while also causing dust, detours and delays in six foothill cities for the next nine years.

But construction alone — likely to be a vivid intrusion into everyday life in these quiet suburbs — will come gift-wrapped in cash. The work will create $2.6 billion in economic output and generate 17,000 jobs, mostly in the hard-hit construction industry, according to a report from Los Angeles-based Beacon Economics, an economic forecasting firm.

“It is just one of the validaters of this project, when you look at the economic benefit these communities will receive,” said Habib Balian, CEO of the Gold Line Construction Authority. “Originally, we think of how it will move people and get people out of their cars. Then there is this additional benefit.”

From the official start of the project on Dec. 2, through early 2027 when passenger service begins, the task of building the train line will require an immense amount of work.