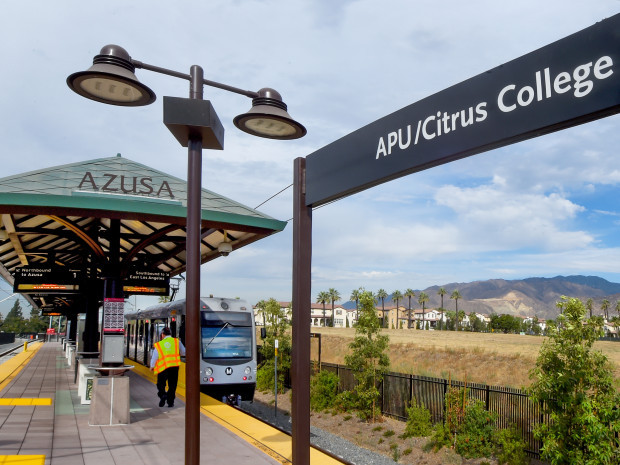 Azusa Station used for transportation by many students attending Azusa Pacific and Citrus College.The City of Azusa and Glendora officially opened its extension of Citrus Avenue Monday September, 19, 2016. The extension provides a direct connection to the APU/Citrus College Gold Line station so drivers and pedestrians dont have to take a long, winding path through Rosedale.(Photo by Walt Mancini/Pasadena Star-News/SCNG)

Full funding of the Gold Line foothill extension to Pomona, with the option of going to Claremont and Montclair, is up for a vote Thursday, Aug. 8, but the ask requires San Gabriel Valley cities to give up more than 60% of their discretionary transportation dollars to fill the funding gap.

Without an extra $126 million, the 12.3-mile extension from Glendora to Montclair would be delayed at least two years and could become more expensive due to escalating costs of labor and tariffs on raw materials, according to the Gold Line Construction Authority.

[Foothill Gold Line CEO Habib F.] Balian stressed that the Gold Line extension has regional benefits, not just to those foothill cities with stations. To curtail it by extending only so far as La Verne would be a loss of its capacity to move cars off the clogged freeways and onto the light-rail train, thereby reducing greenhouse gases that contribute to global warming and extreme weather.

If the train were to reach Pomona and beyond, developers would build more housing along the route, he added. Already the train has resulted in $1 billion in private investment in housing and commercial development, he said.