Here is what Construction Authority CEO Habib F. Balian is saying about Metro’s recent announcement of a nearly $700 million federal grant for the Regional Connector project and how it benefits the Gold Line system:

“Last week, federal and local officials announced award of a nearly $700 million federal grant for construction of the Regional Connector project in downtown Los Angeles. This was a critical achievement for the county, which was relying on such a grant in their financial planning for the project. The federal grant is the first of its kind to be awarded to the county in nearly two decades and will be added to a number of other funding sources – including Measure R – to provide the full funding needed to build this very complicated and important project.”

The following article on the announcement appeared in the Los Angeles Times on February 20, 2014. 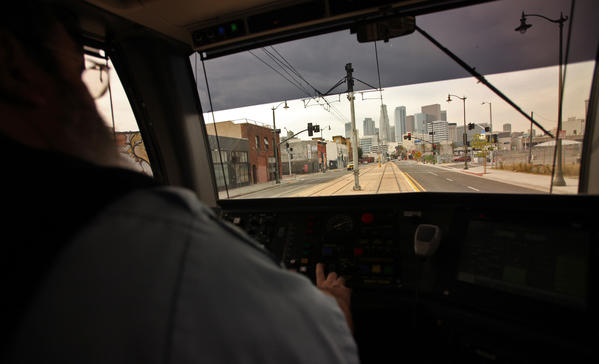 When the Downtown Regional Connector opens, slated for 2020, the Metro Blue, Gold and Expo lines will all run between the 7th/Metro stop and Union Station. Passengers will be able to travel from Long Beach to Pasadena, or East Los Angeles to Santa Monica, without changing trains. Any end-to-end light-rail trip in Los Angeles County currently requires two transfers.

Los Angeles Mayor Eric Garcetti said in an interview Wednesday that he was pleased that the Federal Transit Administration had signed off on the $1.36-billion project. The connector and the Westside subway extension were the two projects Garcetti discussed when he met with Transportation Secretary Anthony Foxx in October.

Included in the project will be three new train stations in downtown Los Angeles: 1st Street and Central Avenue, 2nd Street and Broadway, and 2nd and Hope streets. The rail system will likely see other upgrades as well, including Wi-Fi and a feature telling passengers when the next train is to arrive.

“We are very, very lucky to have two senators on the exact right committees,” Garcetti said. “To their credit, they stepped up and knew the importance of this project for California.”

The combinations of grants, loans and federal appropriations will cover more than 60% of the estimated cost. The remaining funds will come from state and local sources, including Measure R, the half-cent sales tax hike Los Angeles County voters approved in 2008.

Officials said they expect to announce in coming weeks that the Purple Line extension to Westwood will receive about $1.25 billion in federal funds.

“I don’t want to count my chickens before they hatch, but I’m getting good unofficial feedback,” Garcetti said.